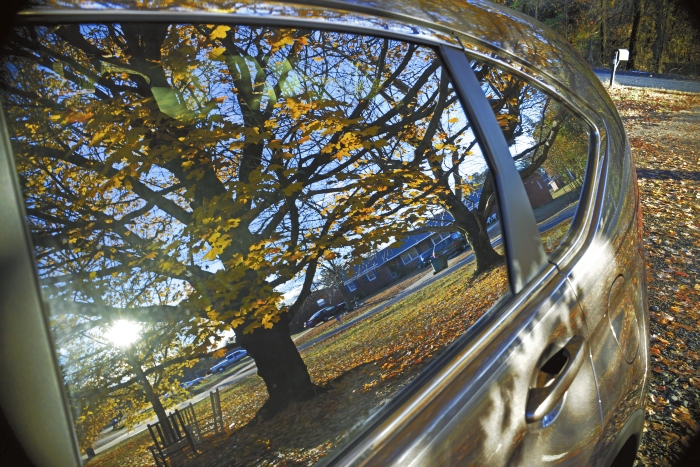 This reflection of my neighbhood in my car window caught my attention for the first time a few days ago. I like the image, but it might be a cliche photo, or it might not be. You decide. photo by Wayne Hinshaw, for the Salisbury Post

Parking my car in the same location for years, I never noticed the reflection in my car windows of my entire neighborhood. How have I missed that image?

Maybe the light was not good. Maybe a maple tree full of leaves blocked the view. Maybe I was just in too big of a hurry when getting out of the car. Who knows?

Once I saw the image I just had to take the photo. It is not a great photo, I suppose, but it did catch my attention. It was kind of fun seeing everything in the reflection in reverse from reality. I am glad that my windows were reasonably clean, and I didn’t have a big smashed bug in the middle of the reflection.

The great photographer Ansel Adams once said, “A meaningful photograph begins with some recognition of the qualities of the subject to which we have a personal response. It is usually a rather ‘immediate’ happening; seldom the result of prolonged thought. The artist frequently responds to some creative symbolism in his subject — yet this may be an unconscious awareness on his part which is transmitted to the spectator in a variety of interpretations. To attempt ‘verbal explanation’ of the image or to impose fixed interpretations will simply ruin the experience for the spectator. ”

Wow, that must be the answer.

A good rule is to not overthink the image before pushing the button. If you think too long you will lose the shot. Someone said, “If you’re thinking long, you are thinking wrong.” Take the picture. You can always think about it later.

Reflections in photos can be hard to capture. The timing and lighting has to be perfect, but sometimes the images can be really neat and look easy to take. Dr. Seuss says that a reflection “wakes up the brain cells. It’s a way of looking at life through the wrong end of a telescope.”

Reading a photographers’ blog about “cliché” photos, I have learned that surely the reflection photo I made was a cliché. Good photographers avoid shooting clichés because they are too easy and everyone has seen them before. Everyone knows that sunsets, close-ups of old faces, or birds in flight are clichés. I shoot a lot of those photos, so I must be shooting clichés.

Photographer Man Ray said, “Of course there will always be those who look only at the technique, who ask ‘how,’ while a more curious nature will ask ‘why.’ ”

What is a cliché, anyway? It is “a photo or opinion that is overused and betrays a lack of original thought. It is predictable.”

Another says that photos being of “common and of ordinary” things doesn’t make them clichés, if they are about the human experience. The important thing is that the photo speaks to the photographer. The photographer is expressing himself and he is pleased with his image. The viewers of the image might think the photographer’s images are clichés, however, depending on their experience. Oh no, they got me again.

I will go with the blogger who said photographers should avoid clichés, but remember that the viewers of the photos love clichés of sunsets, reflections in water, and mountains. Viewers like the warm mood and feelings of orange and red sunsets or the clarity of the image popping up in a cool blue calm lake or river.

I didn’t just shoot the photo with my camera. It was imprinted in my mind first of all, and I used the camera as a tool to record it, cliché or not. I shoot images first and don’t think so much about being motivated to press the button on the camera. I am just trying to record the things around me in my life. They can be artistic, full of color and mood, or not. Maybe I just like the image.

We are surrounded with reflections all day. In the morning, we look into the bathroom mirror and see our reflection. Now, that image might not be worth recording at the start of the day. Later in the day, we see reflections in windows, glasses, puddles of water, shiny furniture, even in a friend’s eyes. Take the time to look for reflections.

My reflection photo: cliché or not? You decide for yourself, but I made you look.