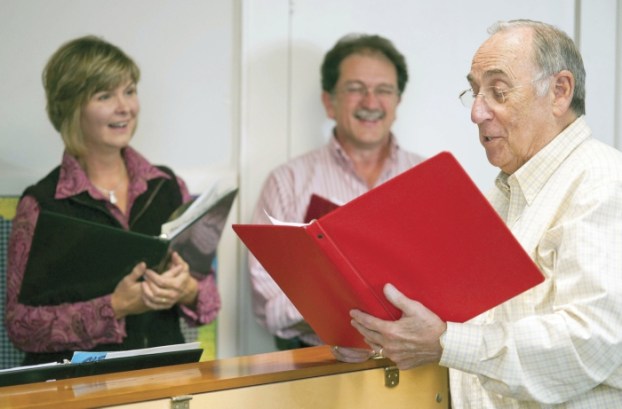 SALISBURY — Just past 5:30 p.m. in the choir room of First United Church of Christ, Leslie Dunkin and Neal Wilkinson reach the final notes of the Christmas song, “Mary, Did You Know?”

There’s a brief moment to take in how beautiful it sounded before Wilkinson lodges a protest with his singing partner.

“I really liked the look that you gave me!” Wilkinson says, laughing as he and Dunkin remember a brief misstep he made in the middle of the song.

The mistake is forgiven quickly, given this is an early rehearsal for the 10th annual “Christmas Traditions: the Stories and Music of Christmas,” which will be held at 7 p.m. Dec. 15 and 16 at the Meroney Theater on South Main Street.

As always, the price of admission for what has become a Salisbury tradition in its own right is one canned item for Rowan Helping Ministries. That’s it. Last year, Dunkin notes, the event collected more than 1,700 pounds of food for the RHM shelter, and it’s always a time of year “when they really need it the most.”

“Christmas Traditions” is a mix of the considerable story-telling talents of retired Catawba professor Dr. Karl Hales and the equally noteworthy musical chops of Dunkin, Wilkinson and Susan Trivette.

Trivette accompanies the singing duo of Dunkin and Wilkinson on piano. “She’s the only one who knows what she’s doing,” Wilkinson says.

Wilkinson — maybe Salisbury’s most famous tenor — will have four solos during the program, and Dunkin will have two. They’ll be singing together on seven other songs. Never before have they done more than three duets.

As is the tradition — there’s that word again — the evening blends in both the fun and religious significance of Christmas through the stories and music.

At this early practice, Wilkinson, Dunkin and Trivette make notes for themselves on things such as breathing, tempo and entry points.

“We’ll be learning mostly about Neal and his insecurities,” Wilkinson promises.

The “Christmas Traditions” nights overall are laid-back and fun. The performers are likely to wear red Christmas sweaters and Santa hats. It’s also not unusual for props such as antlers, pink bunny ears or fake red noses to show up.

“Every year,” Hales says, “there has been a challenge — how do we take Neal out of his comfort zone?”

Years ago, Wilkinson was fitted with a blinking red nose for a Rudolph song. He says his barber still talks about that. Another time, the big cards he was using to illustrate the song “Nothing for Christmas” were all messed up, but the crowd went with Wilkinson, and it made the song funnier.

Wilkinson also isn’t keen on dancing to songs such as “Rock Around the Christmas Tree.”

This year, the song that takes Wilkinson out of his comfort zone might be one from the movie “Elf” titled, “Sparklejollytwinklejingly.” Wilkinson will be catching a break on the dancing to that song, which will be left up to a guest appearance by Dan and Winnie Mikkelson.

Hales enjoys sitting in on the practices because each rehearsal is like a mini-concert for him.

“I haven’t heard ‘Caroling, Caroling’ for awhile,” Hales says, urging them to give that song a run-through.

A new story Hales will try out this year is “The Catmas Tree,” which will cover Stinker, Mr. Z and regurgitated pine needles. Needless to say, you’ll have to attend the performance to hear more.

Listening to Hales tell a portion of the tale, Dunkin nods knowingly. “I’ve lived it,” she says.

Hales says at least half of the stories he’ll be telling this year are new.

Hales and Wilkinson collaborated on the first night of music and storytelling 10 years ago, and they’ve been in each production since. Dunkin has been part of the show since the second season. Julie Chamberlain played the piano the first year, followed by Zebbie von Durant for five years and Trivette for the last three.

A young singer named McClain Miles provided an added voice for a couple of years.

The first year, Hales and Wilkinson booked Keppel Auditorium. It snowed the day of the performance and only about 100 people showed up. In the vastness of Keppel Auditorium, the crowd seemed even smaller, Hales says.

But the men received enough positive feedback from those attending that they decided to try it again. Early on, the performers took it year to year, but they figured they had a kind of tradition going when people started asking when the next one was scheduled or someone would stop them and make a song request for the next year.

You know you’ve made it, the men say, when a fan asks for a repeat of “I Want a Hippopotamus for Christmas.”

These days, they have an email list keeping folks updated, and people come from other states every year because it has become that word again — tradition.

You can count on hearing certain songs, such as “Mary, Did You Know?” and “O Holy Night.” The performers also end every show by standing and singing “We Wish You a Merry Christmas” with the audience.

Back at this early practice, Wilkinson reveals a dark secret. He has never been a fan of the song “Little Drummer Boy.”

When Wilkinson complains that the song has been done to death, Dunkin encourages him to at least give this particular version, once sung by Bing Crosby and David Bowie, a try. After they’ve sung it beautifully and Wilkinson has worked out where and when he should come in, he’s a convert.

“That’s the only arrangement of that song I would have agreed to,” he says.

The best thing about “Christmas Traditions,” the performers promise, is that you’ll recognize the music, and the night will put you in the mood for the holiday. The audiences also will see four people sharing a personal gift to the community.

It will put you in a comfort zone.