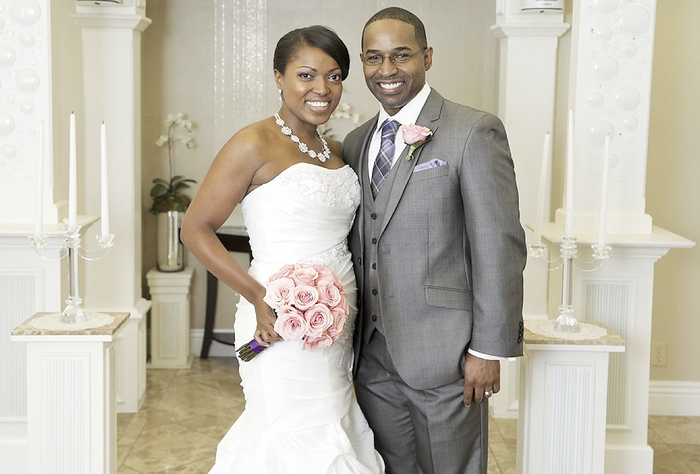 LAS VEGAS, Nev. — Dr. Nikki Elaine Jones and Dr. Robee Bailey Jr. were united in marriage June 19, 2014, at the Chapel of the Flowers. The ceremony was followed by a reception at The Henry Restaurant at The Cosmopolitan Hotel.
Lark Staley was flower girl and Sage Staley was ring bearer.
The bride is the daughter of Bernice and the late Dr. Clinton M. Jones of Salisbury. She is the granddaughter of the late Mr. and Mrs. Willie Evans Sr. of East Spencer and the late Dr. and Mrs. Lee Clarence Jones of Salisbury. A 1992 graduate of West Rowan High School, Nikki received a Bachelor of Science in Biology from North Carolina Central University in 1996 and received her Doctor of Dental Surgery from the University of Detroit-Mercy in 2001. She is the owner of Trinity Cosmetic and General Dentistry in Concord.
The groom is the son of Mary and the late Robee Bailey Sr., and the grandson of the late Eula and Jim Phillips and the late Martha and Roy Lee Minor, all of Helena, Ark. A 1990 graduate of Warren Township High School, he received a Bachelor of Science in Chemistry from Southern Illinois University in 1995; his Doctor of Medical Dentistry in 2002 from Southern Illinois; and his Master of Science in Periodontic and Oral Biology in 2005 from St. Louis University. In 2007 he became a Board Certified Orthodontist from Howard University. Robee is the owner of Carolina Dental Specialists in  Concord.
Following a wedding trip to Puerto Vallarta, Mexico, the couple are making their home in Charlotte.