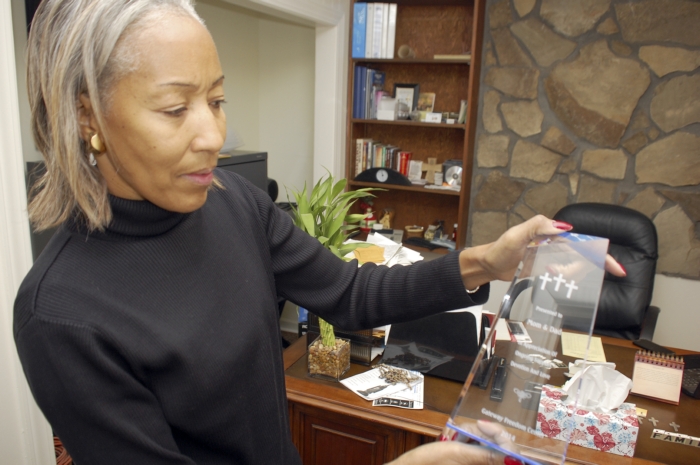 Mark Wineka/Salisbury Post Kathy White holds one of the awards she planned to hand out to people whose help was instrumental in her opening of the Gateway Freedom Center Saturday. This award was going to her mother and father.

SALISBURY — You could understand why Blanche Gordon was feeling a little bit uneasy, maybe even scared.

After almost two years in prison in Black Mountain, Blanche was released on parole Friday afternoon. She had nowhere to go, except to the Gateway Freedom Center in Salisbury — a new transitional home she had heard about from Kathy White during Kathy’s prison ministry in Black Mountain.

So that’s where she stayed last night, and Gateway Freedom Center is where she intends to live over coming months until she can find the right path for her. She wants to secure a job, become involved in church and, ultimately, be reunited with her two daughters.

But Gordon knows it could be a long journey — just being out of prison takes getting used to.

“It’s very strange,” Gordon said. “I just made it part of my plan to come in, because I thought  that was best.”

It’s women such as Gordon who White hopes Gateway Freedom Center can help make the transition from prison or life on the streets and issues as serious as homelessness, abuse, drugs, alcohol and prostitution.

The faith-based, non-profit Gateway Freedom Center held an open house Saturday, and it was a time for White, director of the new center, to celebrate the countless hours of work that went into renovating the former Weaver Electric building at 1315 N. Main St. and all the people who helped her reach this point.

In her office, she had a box full of specially made awards she intended to hand out to individuals later in the day.

White said the opening Saturday of the 16-bed Gateway Freedom Center was part of a vision given to her by God. That’s just the way it is.

“To God be all the glory for everything,” said White, who described herself as a pastor who gave her life to the Lord 22 years ago. “I can’t take any of the credit.”

Larry Peeler, is a member of Gateway Freedom Center’s new board of directors and also a member of Piedmont Intercessors, a prayer ministry founded in 1981.

“I think it’s a place that God is opening up to minister to those who have lost hope, to give them hope in and through Christ Jesus,” Peeler said of the center. After meeting White 16 months ago, he knew it would be a ministry with God at its heart, he added.

Prior to having any residents, the center has been having support group meetings every Thursday night. It also hopes to provide GED classes, a food pantry and clothing bank.

White has a rule for new women residents, such as Gordon, that they have no visits and make no telephone calls for 14 days. There are classes, assessments and interviews, trying to determine whether a woman should be part of the center’s 3-month, 6-month or yearlong transitional program.

White said a typical day will start will breakfast, followed by a class from 8:30 to 9:30 a.m. After the initial two-week period, the women will be able to sign in and out from the center. They are given a window of 11 a.m. to 3 p.m. to look for jobs.

They receive three meals a day at the center and when the place is full, as White expects it soon will be, it’s most likely individuals will be sharing upstairs bedrooms with someone else.

The center has seven bedrooms upstairs — each with two beds — and a small family section downstairs, in case a woman resident has children with her.

White also has provided plenty of bathrooms, showers and laundry facilities, a caterer’s kitchen, a more industrial-sized kitchen and a security office close to where the women will come and go.

Upstairs, there is an area near the stairs to relax and talk. Adjoining it is a television room.

The downstairs includes  a reception area, some offices and a conference room. White emphasized that virtually everything was donated, and she gave credit especially to Novant Health and Dr. James Comadoll and his office for their assistance.

Folks from Grateful Heart Ministries and Bethel Power Of Faith have been important friends in the center’s creation, as have groups such as the Girl Scouts and First Baptist Church’s Disciples Now group.

There are many others, White added. When she has a full house — White said there is a waiting list of people to be considered for residency — the operation will require about 15 people. White is hoping to secure grants to help with all the expenses.

Janice Williams has signed on as an administrator and house mother for the women residents.

She was showing the accommodations Saturday to Tiffaney Sanchez, who has been staying at Rowan Helping Ministries’ homeless shelter. Sanchez,  a recovering alcoholic, said she is interested in the transitional housing, if she would happen to qualify.

“From what she (Williams) has told me, it’s wonderful,” Sanchez said.

White actually had her eyes on this particular property and hopes for this kind of ministry 10 years prior to her return from Maryland in May 2013.

“The Lord said this is where I want you to be, but not now,” White said. “This building was in my spirit.”

When she returned, the building remained available. God showed her how  to do the rest, she said.

All the open house activity made Blanche Gordon a little uneasy Saturday, and she spent some time secluded in a break room. White said she had to remind Gordon she wasn’t in prison any longer and that the Gateway Freedom Center was meant to protect her.

“I think it’s going to be awesome,” Gordon said. “I think Kathy is going to do an awesome job.”