Civil Air Patrol will receive Congressional Gold medal, and Gib Russell will be there 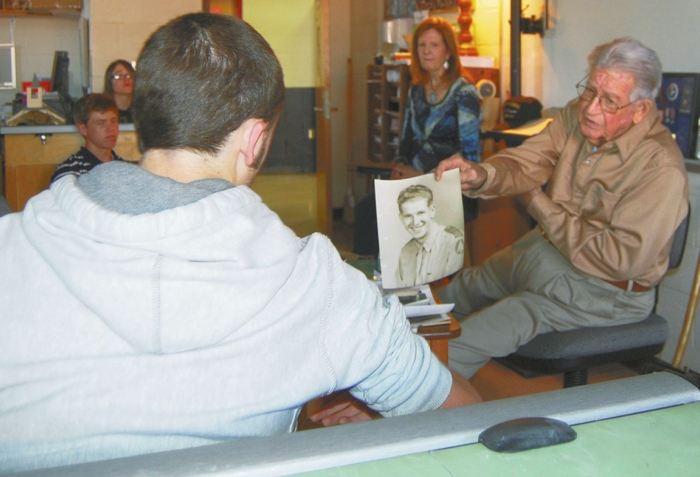 Russell passes around a photo of himself when he served in World War II. Jeanie Groh/Salisbury Post

The ceremony, which will take place at 3 p.m. in Statuary Hall of the Capitol, recognizes the Civil Air Patrol’s role in surveillance of the Atlantic and Gulf coastlines against deadly German U-boat attacks during the war.

Russell will be among 13 Civil Air Patrol members from the World War II era who will be attending. He was still a teenager when he was flying along the coast, looking for signs of German submarines. He was stationed at Coastal Patrol Base 16 in Manteo.

Families of deceased Civil Air Patrol members also will be attending, including the relatives of Vernon Rudolph, founder of Krispy Kreme; Richard L. Yuengling Sr., the fourth co-president and manager of D.G. Yuengling and Son brewers; and Willa Brown, the first African-American woman to earn a private pilot’s license and to hold a commercial pilot’s license in the United States.

On Wednesday evening, CITGO will sponsor a celebratory dinner at the Hyatt Regency Crystal City Hotel in Arlington, Va., where Russell and other World War II-era CAP members will receive bronze replica medals, courtesy of CITGO.

Russell’s daughter, Patti Boles and Judy Stoner, will be accompanying Russell on his trip to Washington.

During the war, the Civil Air Patrol had planes flying out of 21 bases along the Atlantic and Gulf coasts, from Maine to the southern tip of Texas. They ended up spotting 173 U-boats and attacked 57, according to General Aviation News.

The CAP also escorted some 5,600 convoys and reported to military authorities, 17 floating mines, 36 bodies, 91 ships in distress and 363 survivors in the water.

Overall, 65 Civil Air Patrol members lost their lives in the line of duty by the end of World War II.

Approximately 200,000 men, women and teenagers participated in the Civil Air Patrol during the war years. The organization was founded Dec. 1, 1941 – six days before the attack on Pearl Harbor.

General Aviation News says the Senate authorized the Congressional Gold Medal for the Civil Air Patrol in May 2013, with the House approval coming earlier this year. President Obama signed the bill into law May 30, leading to Wednesday’s scheduled ceremony.

Russell learned to fly as a 15-year-old at an air field that is today’s Rowan County’s Airport. Because he was too young to enlist when World War II broke out, he joined the Civil Air Patrol at 17 in Manteo, flying up and down the coast looking for oil slicks and submarines.

His small plane carried a bomb, and he dropped a bomb once in trying to sink a U-boat. It hit right beside the submarine, and a U.S. destroyer later finished off the U-boat.

Because Russell had dropped out of school in the seventh grade, he later was not allowed to join the Army Air Corps, despite his extensive flying experience by the time he was 18 and trying to enlist. Instead, he became an Army infantryman, serving in the European Theater.

Russell, now 89, eventually rose in the ranks of the Civil Air Patrol to become a lieutenant colonel. He has been featured in the Salisbury Post in years. In the past, he has spoken to East Rowan high students about his war experiences, most recently this year leading up to Veterans Day.