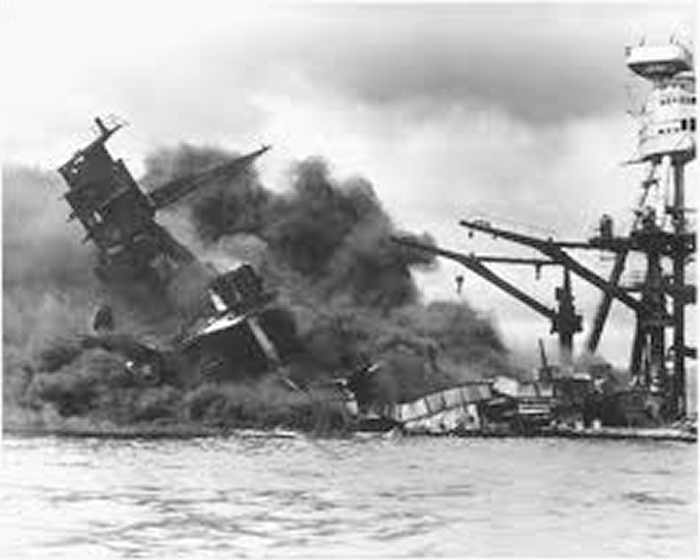 Few people are left who remember Pearl Harbor on this Sunday, December 7, 2014. But an event took place 73 years or 3,796 Sundays ago on December 7, 1941, that President Franklin D. Roosevelt proclaimed as, “a day which will live in infamy.” That’s when the Imperial Japanese Navy steamed to within striking distance of Pearl Harbor, nestled within the Hawaiian Islands. The ‘Japs’—as they were derisively called then—flew their carrier-based dive bombers and torpedo planes over Pearl Harbor to effectively wipe out most of the U. S. Pacific fleet and severely cripple U.S. Navy Pacific operations.

Practically every kind of ship or smaller vessel the Navy counted was either anchored, tied up at a pier, or in drydock. Listed from official U.S. Navy records were eight battle ships—the prime targets of the Japanese Navy—two heavy cruisers, six light cruisers, four submarines, and 29 destroyers. Two destroyers were in drydock, while the U.S.S. Moneghan, DD-354, was preparing to get underway to join the U.S.S. Ward, DD-139 in patrolling the harbor entrance. A possible attack by Japanese submarines had been of concern by the higher U.S. command, including Admiral Husband Kimmel, CINCPAC (Commander-in-Chief Pacific). Included among the remaining mix of vessels were two destroyer tenders and crew, mine sweepers, mine layers, seagoing tug boats, 12 motor torpedo (PT) boats, and a hospital ship, the U.S.S. Solace, AH-5. A total of 105 craft, both self propelled and non-self-propelled were in Pearl Harbor as if just waiting for the enemy to come with its bombs.

It was 0753—7:53 AM civilian time—Sunday morning. The first wave of enemy planes flew from their aircraft carriers 274 miles off the coast of Oahu to strike the still-sleepy ships in Pearl Harbor. The second wave hit at 0855. Few were spared by the time the chaos and carnage had ended at 0955.

Over at Hickam Airfield, General Walter Short, Commanding, U.S. Army Aircorps, had ordered all planes at Hickam, Bellows and Wheeler Fields to be parked on the taxiway. That was to make it more difficult for any possible saboteurs to sneak in and damage or destroy aircraft.  However when the second wave of the Japanese attack struck Hickam at 8:40am, by 9:45 nearly half the airplanes at Hickam Field had been destroyed or severely damaged.

Personnel casualties totaled 189 people killed, 303 wounded, and 37 missing. Despite the damage inflicted by the Japanese, the vital repair facilities and gasoline storage tanks at Hickam, Pearl Harbor and elsewhere were unharmed.

I was in Pearl Harbor in the late summer of 1959 serving aboard the destroyer tender, U.S.S. Frontier, AD-25. Much of the Frontier’s crew was made up of Pearl Harbor survivors, many of whom were only teenagers on the morning of the attack in 1941. Their accounts were as real and as timely as if they occurred on the day before their telling. I sat around many evenings listening to stories of personal survival, of death and carnage, forever emblazoned in the minds of survivors, and of heroism that came naturally to those American sailors and Marines who instinctively came to the aid of their shipmates, sometimes in vain.

I heard one of my shipmates say that he had arrived at Pearl under orders about two weeks after the attack. The stench of death and destruction was still in the air.

Of the eight battleships in the harbor (prime targets of the Japanese), all were damaged severely. But not all were damaged beyond repair, even though they may have been sunk. However, only three were beyond repair: The Arizona remains in her watery grave on the bottom of the channel next to Ford Island, with most of her crew, 1,102 men, still aboard. The Utah remains submerged next to a pier at Ford Island. The Oklahoma was raised but not rebuilt.

Contrary to popular belief, the Arizona is not a commissioned line ship of the Navy. Regardless, ships entering Pearl Harbor continue to render honors to her as they would if she were floating. I had that experience in 1959 when the Frontier entered Pearl. I was standing on a portside deck when the announcement “attention to port” was made. Everyone on that (left) side of our ship turned facing out to the port side. In a moment, another announcement said “hand salute, lower the colors.” I along with the other men on the deck saluted and the U.S. flag flying over our bridge was lowered to half staff. When we left Pearl and was leaving the harbor, I made a point of being on the starboard deck when the salute to the Arizona was given. The U.S.S. Arizona Memorial commemorates the more than 2,000 military personnel killed in the Pearl Harbor attack.

Bravery above and beyond the call of duty was in ample supply on the morning of December 7, 1941. Receiving Medals of Honor for their superb heroism, 15 men were honored for their extraordinary actions. The last surviving Pearl Harbor Medal of Honor recipient, John William Finn died at age 100 on May 27, 2010.

It is perhaps fitting to add that this year, the U.S.S. Arizona Reunion Association will hold their final reunion December 1st thru the 8th in Honolulu, Hawaii. Six of the nine known living survivors are scheduled to attend. After 38 years, the Association will be disbanding December 2014.

Bill Ward is a writer and U.S. Navy veteran who lives in Salisbury.