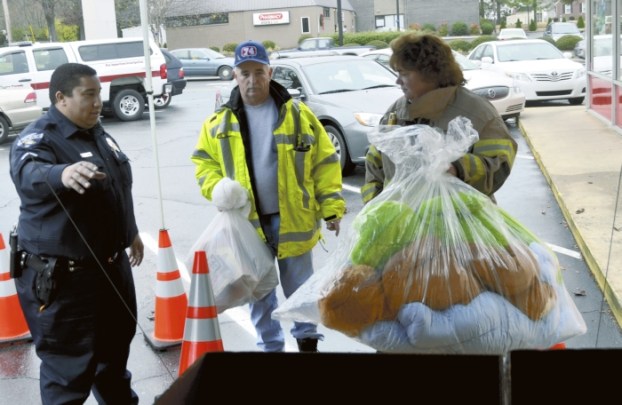 Salisbury Police Officer Reuben Ijames directs Bobby Burleyson and Deborah Horne, both with the Rowan County Fire Marshal's Office on where to drop off donations for the Toys for Tots program. Several local fire departments and other fire personnel donated money or toys for the program. Ijames and local Toys for Tots coordinator Arbe Arbelaez will stay on the roof of Krispy Kreme throughout the weekend for the toy drive. Shavonne Walker/Salisbury Post

Toys for Tots: Police, organizer on top of the roof at Krispy Kreme this weekend

Salisbury Police officer Reuben Ijames has been in law enforcement long enough to hear his fair share of jokes about police and doughnuts, but this community relations officer is taking it all in stride this weekend for a good cause.

Ijames will spend much of his weekend on the roof of Krispy Kreme Doughnuts in order to help collect for Toys For Tots. The annual toy drive benefits children in Rowan County. Anyone in the community can donate new, unwrapped toys for infants and children up to 12 years old. The toys are collected for both girls and boys.

Ijames has been at the doughnut shop, located at 1428 W. Innes St., since 6 a.m. Friday. He’ll come down from the roof at midnight and return the next morning. Local Toys for Tots organizer Arbe Arbelaez will stay on the roof all night in the event someone wants to drop off a donation.

The toy drive is a U.S. Marine Corps Reserve program. Arbelaez is a former marine.

“We are trying to give back to the less fortunate,” Ijames said.

He said at a time when the perception of law enforcement can be seen negatively it’s a nice opportunity to show a positive side.

The toy drive began as a way to collect toys for children who had come into Rowan Social Services’ system too late and who were not going to receive gifts.

“We collected toys to take care of them,” Arbelaez said.

The next year a teacher asked Arbelaez to help provide toys for some of her students. In the years after, Arbelaez said he began talking to now retired Police Chief Mark Wilhelm, who suggested Arbelaez connect with Toys for Tots. This is the 8th year of the program here in Rowan County.

He said there is a definite need for both boys and girls infants as well as boys and girls ages 10 to 12 years old. Arbelaez said these are the often forgotten about ages. He encouraged people to think of these age groups when they are buying toys.

Some volunteer firefighters are also helping with the toy drive. Several people within the Rowan Emergency Services Department contributed money for toys and some area firefighters donated toys and stuffed animals on Friday.

The Toys for Tots Foundation split part of Rowan County this year. Those who live in the southern Rowan area including Landis, China Grove and Kannapolis, will receive toys from the Cabarrus Marine Corps League Detachment 1175.

“All of these toys go to children in need here in Rowan County,” she said is the reason she loves it.

She said the campaign is one of the company’s biggest projects.

Anyone who wishes to donate a check may make it payable to the Toys for Tots Foundation. All monetary donations —
checks, cash and gift cards — will be turned over to the Toys for Tots program to buy additional toys.
Contact reporter Shavonne Walker at 704-797-4253.
You Might Like

Descending down the steps into the basement at Dunn’s Mountain Baptist Church with Pastor Jody Almond, I had no idea... read more