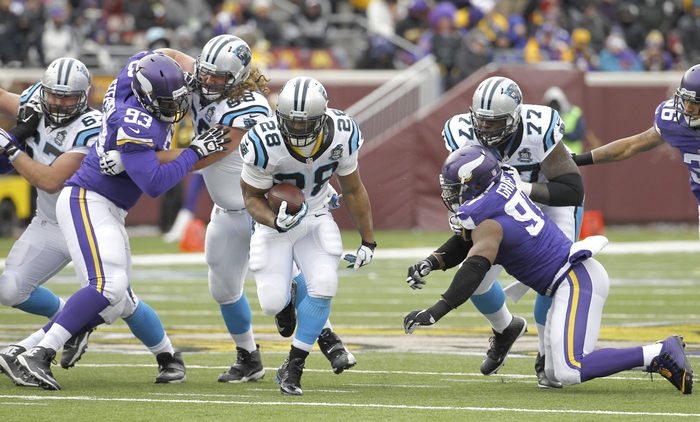 People can refer to the NFC South as the “NFC Slouch” all they want.

That doesn’t change the reality that the Panthers, who’ve won only three of 12 games, will pull within a half-game of the division lead if they win in New Orleans on Sunday and Atlanta stumbles at double-digit favorite Green Bay on Monday night.

“Believe me, whichever team gets into the playoffs, there is going to be no apologies,” Rivera said. “You play the game that you play. They fall the way they may.”

Rivera said he needed to look no further than the victory the Saints (5-7) posted at playoff-contending Pittsburgh last Sunday for proof the NFC South champ will have a chance to be competitive in the playoffs.

Optimistic as that outlook may be for a coach whose team has lost six straight, Rivera won’t get any argument from the Saints.

“I don’t care if they’ve lost 15 in a row,” defensive end Junior Galette said. “Just like that, they can win the next four games and be in” the playoffs.

New Orleans beat the Panthers (3-8-1) by three scores when the teams last met in Carolina on Oct. 30. But the Saints are not about to underestimate quarterback Cam Newton, no matter how much he’s struggled lately.

Galette, who sacked Newton twice in these teams’ last meeting, said he still sees Newton as “one of the most elusive athletes in the league.”

“I know he’s having a rough year, but you just don’t know what you’re going to get so you can’t get complacent,” Galette said. “He’s a phenomenal football player, I feel like. He just needs some more help.”

NEWTON’S DIP: Newton is in the midst of the worst slump of his NFL career, having thrown at least one interception in eight straight games. During the team’s six-game losing streak, Newton has thrown nine interceptions and six touchdown passes and been sacked 25 times. Newton also hasn’t been healthy all season, but doesn’t want to dwell on his soreness or his unflattering individual numbers.

“You play this game for one reason and for one reason only, and that is to win,” Newton said. “I’m not frustrated at all. I’m just yearning for a win.”

GUARDING GRAHAM: Jimmy Graham has given the Panthers fits, with seven TDs in his last six games against them. Pittsburgh, which held Graham without a catch last Sunday, may have provided a blue-print to containing New Orleans’ star tight end, but it doesn’t come without risk. While the Saints never threw to Graham last Sunday, Drew Brees still had five scoring passes to five other targets.

“That’s the thing about what they have in New Orleans,” Rivera said. “You try to take one guy away and the other guys are going to step up. You saw some of the big plays made by the wide receivers.”

SLOW STARTERS: The Panthers have trailed at halftime in nine of 12 games this season, and have been outscored 178-75 in the first half. One reason is the number of times they’ve been held to field goals inside an opponent’s 20. Carolina is tied for 27th in red zone efficiency, converting only 43.8 percent of such opportunities into touchdowns.

“You can’t kick field goals early,” Rivera said. “You’ve got to be able to score touchdowns.”

STILLS RISE: With Saints receiver Brandin Cooks sidelined for the season with an injured hand and opposing defenses preoccupied by Graham, second-year pro Kenny Stills has emerged as New Orleans’ leader in yards receiving this season with 691, surpassing Graham (670) and veteran Marques Colston (634).

DOME DISADVANTAGE: When the Saints routed Green Bay in the Superdome on Oct. 26, they’d won 11 straight at home, or 20 straight, including playoffs, under coach Sean Payton (who was suspended in 2012). New Orleans has since lost its last three at home, however.

“It gets back to playing good football whether you’re home or on the road,” said Payton, whose team has won two straight on the road after losing its first four outside the dome this season.