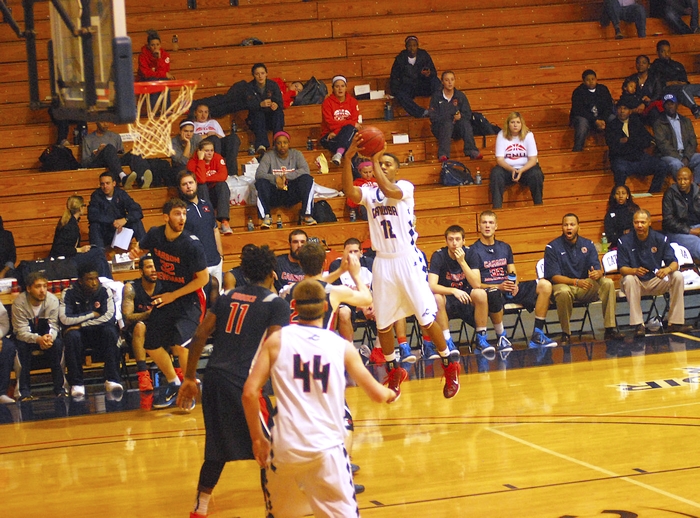 SALISBURY — For 99.9 percent of the world’s population, it was an impossible shot, a prayer, but for Catawba’s K.J. Arrington it was money.

Spinning, fading, with a defender in his face and 17 feet from the hoop with the shot-clock winding down, Arrington tossed in a dagger with 56 seconds left.

“K.J. will tell you that’s what he’s supposed to do and that’s a shot he’s supposed to make,” Catawba coach Rob Perron said. “The better player you are, the tougher the shots you have to make sometimes because the opposing defense is always focused on you. K.J. made at least three very tough shots today.”

While it was Arrington’s only bucket of the second half, it was the signature moment of Catawba’s hard-earned 78-73 SAC victory over Carson-Newman at Goodman Gymnasium on Saturday. The victory only meant one game in the SAC standings, but pyschologically it meant more. After some tough times, a 2-2 league record has a different feel than 1-3.

“The mindset we have right now is that we knew we’d win this game as soon as we put on our jerseys,” Arrington said. “It’s another building block for us.”

“I’ve never seen a team that played zone defense the whole game, and I have to compliment them for playing it very well,” Morrison said. “But I was still able to get to the rim some, and as a team we played with patience and a lot of composure. We didn’t force shots today.”

Offensively, Carson-Newman also is very different from the standard SAC team. The Eagles (2-6, 1-3) continued their 3-point struggles with a 1-for-9 day on Saturday, but the guards drive hard and the big guys are active. Carson-Newman also owns a matchup nightmare in 6-foot-6, 230-pound forward Carson Brooks. Catawba had no single answer and was forced to double-team Brooks. He still shot 8-for-10 from the field.

“We didn’t find a way to stop him until he fouled out,” Perron said. “We probably should’ve double-teamed him earlier than we did.”

Brooks fouled out with 3:16 remaining, getting his fifth personal when he lost a battle on the Catawba glass with the Indians’ Troy Warren.

“When 11 fouled out — we knew that was the ballgame,” Morrison said.

Carson-Newman shot 51.7 percent, significantly better than Catawba’s 42.4, but the Indians compensated by getting to the foul line 13 more times and by making nine 3-pointers.

“We were picked 11th (out of 12 teams) in the preseason,” Taylor said. “But we’re showing teams that they’re going to have to come play against us. We’re tired of losing.”

Catawba (4-3, 2-2 SAC) was knocked back by Carson-Newman’s intensity at the outset and trailed 10-3. But Arrington got the Indians started, as he often does. Then Morrison jumped off the bench and started scoring. The Indians pulled in front 38-33 at halftime.

Catawba stayed in control, but the lead was down to 52-51 when Taylor made a pull-up jumper after his defender fell backwards to push the lead back to three with 10 minutes left.

After Sealey forced a turnover on a five-count, Morrison out-fought a cluster of Eagles to score on a follow. When Morrison knocked down a left-corner 3-pointer with 6:48 remaining, the Indians led by nine at 64-55.

Catawba was able to finish things off  thanks to Arrington’s clutch shot and two big free throws by Sealey (right after he had missed two) with 16 seconds left.

“This was a big one for us going into exams,” Perron said. “We showed a lot of maturity for such a young team.”