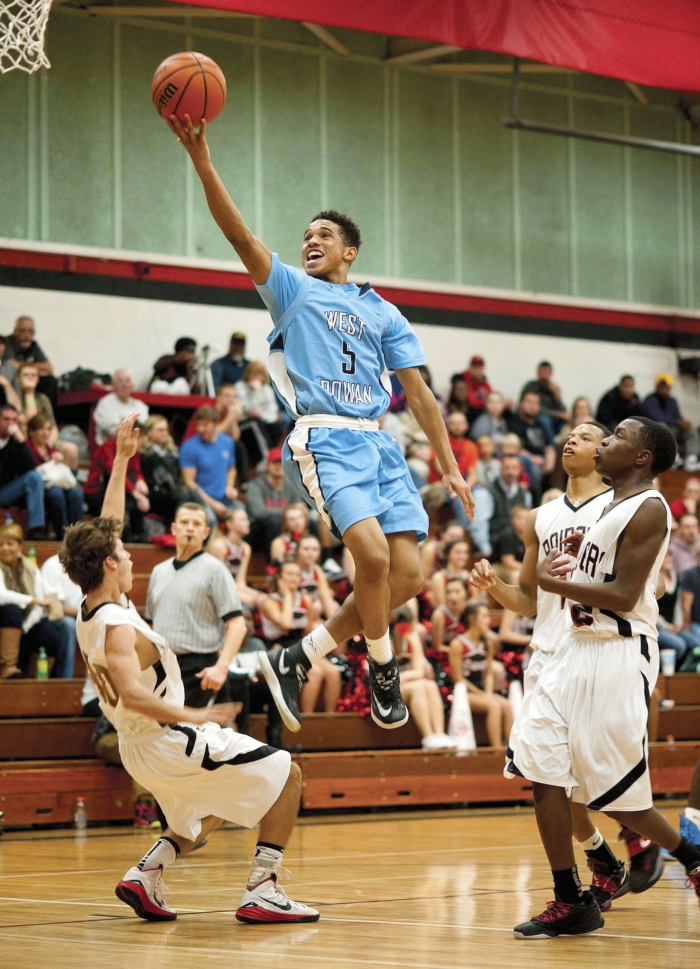 LANDIS — In a bruising, whistle-plagued South Piedmont Conference game, West Rowan’s Greg Joseph was the blue-collar guy who got it done.

The senior’s 15 points, almost all of them on hustle stickbacks, pushed West Rowan to a 67-64 SPC win in the South Rowan gym.

“It was one those games where you just have to throw your heart on the floor and rebound,” Joseph said. “We just kept working.”

There wasn’t anything pretty about it. West Rowan (2-3, 2-0 SPC) got 28 points on free throws while South Rowan got 23 from the charity stripe.

West Rowan coach Mike Gurley will take it. His team lost its last eight games last season and began this season 0-2, so all success is sweet.

“We’re learning to win again — and it’s been a while since we have,” Gurley said. “We’re really, really young, and this was a good win for us. South Rowan played really hard. Lavon Hill is good, and Tyler Rary played great for them tonight.”

Hill’s 21-point outing included 10 free throws, a dunk off a lob by Tre Littlejohn, and a lunging 3-pointer that he banked home at the buzzer. Rary handled the ball well and scored 13. Those two had to do a lot, with Qwan Rhyne still out with an injured hand and Tireek Wilder going down with an injury.

“My guys can play,” South Rowan coach Bryan Withers said. “We were right there all night.”

South Rowan got a first-half spark from Littlejohn’s quickness, while West Rowan got a lift from a dunk by 6-foot-8 senior Tomas Valle.

The Raiders led 36-32 at halftime. It was 49-all after three quarters.

The killer sequence for the Raiders (1-3, 1-2 SPC)  came  with just under three minutes to play and South Rowan trailing by four. Hill missed inside, and then Alex Stewart battled for two offensive rebounds, but the ball still wouldn’t go down on his  point-blank attempts. Rary didn’t miss often, but he missed two free throws right after that.

The biggest play for the Falcons came when Joseph fought his way to a critical putback when teammate Kortez Weeks missed a pullup in the lane with 1:15 to play. That bucket pushed West Rowan’s lead to 62-56.

Both teams battled serious foul trouble. Gurley felt the critical juncture came early in the fourth quarter when both of his starting guards, Celexus Long and freshman Martavio Rankin, were on the bench with four fouls with a  long way to go and the game swinging back and forth.

“Our sophomore backcourt of Weeks and Nick Warren did a really nice job at a key time,” Gurley said. “We were even when they came in and when Celexus and Martavio came back, we were ahead.”

Rankin shared team scoring honors with Joseph. Thirteen of his 15 points came at the foul line. He made nine free throws in the second half and five in the fourth quarter.

“This was a three-game week for us, and those are tough physically, mentally and emotionally,” Gurley said. “It’s a process for us, step by step, and it’s not like you can jump over  any steps. But we’re 2-0 in the league now, with both wins on the road.”