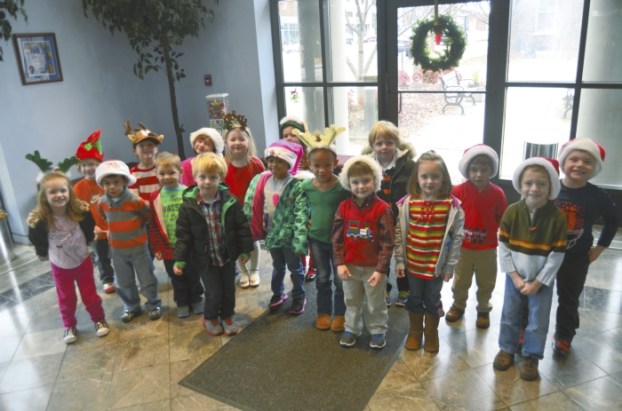 As they have done for years, the preschool class at First United Methodist Church delivers its 2014 Christmas Happiness donation to the Salisbury Post. Shavonne Walker/Salisbury Post

Preschoolers give to Christmas Happiness Fund

It’s been about a decade since the first group of preschoolers from First United Methodist Church hand delivered money they collected for the Christmas Happiness Fund.

This year’s class was made up of two, three and 4-year-old students who spent much of November collecting the money. The students were able to donated more than $200 to the Fund. The students along with their teachers and parent volunteers walked to the Salisbury Post on Thursday and delivered their donations.

“Some of them took from their piggy banks,” said teacher Patsy Langlais

“They were very willing to give,” said teacher Jodi Rocco.

Lindsay Wineka is director of the program. The other teachers include Chrystal Powers, Frances Edwards and Kelly Smith as well as the parent volunteers Ruthie Pardue and Magen Barber.

The donations to the Christmas Happiness Fund come from people in the community who earmark their gift in memory or honor of someone. Donations are brought to the Salisbury Post during business hours. The money is then given to the Salvation Army of Rowan County to distribute to eligible families.

The following donations were given:
Carl and Mary Repsher — $100
Anonymous — $100
In memory of my parents Lloyd and Nellie Safrit by Calvin Safrit — $100
In memory of Alice Jean Lyerly by Bettie and Jim Lyerly — $50
Jim and Nina — $200
In appreciation and honor of Milford Hills UMC Crosstalk Sunday School Class  —$250
In appreciation and honor of Milford Hills UMC Tuesday morning Bible Study — $250
In appreciation and honor of Milford Hills UMC Wednesday morning Prayer Breakfast — $250
In memory of Don Evers by Mary Evers — $25
In memory of Geraldine Miller and Richard Miller by Leo Miller — $400
In memory of my Girl Scouts, Debbie, Sara Fowler Anderson, Claudia Godfrey, Jennifer Whitman and Libby Brower by Mr. and Mrs. Gordon Shermer — $300
In honor of Calvary Senior Meal Sight — $25
In honor of Oasis Book Club by Jenny Sparks — $150
In memory of our parents Violet and Mason Lowrance by Tara and Sharon — $50
In memory of Charlie Peacock and in honor of Dot Peacock by Marshall and Jennie Murphy — $100
Fowler Agency — $200
In honor of Mary Frances Roueche by David and Anne — $100
First United Methodist Preschool — $234.06
In loving memory of my husband, Boyd Moon, and my parents, Bill and Melda Killion and other friends and family that have passed away from Peggy K. Moon — $100
In honor of my wonderful daughter, Heather Casper, and beautiful granddaughters, Alexis Locklair and Brittany Livengood, and dear friends and family from Momma/Grandmommy/Peggy Moon — $100
Total $3,084.06
Running Total $15,562.06
Contributions to Christmas Happiness may be delivered to the Salisbury Post, 131 W. Innes St., between 8 a.m. and 5 p.m. weekdays or mailed to Salisbury Post Christmas Happiness Fund, P.O. Box 4639, Salisbury, N.C. 28145-4639. Please make checks payable to Christmas Happiness Fund and indicate how you want your donation listed.
Contact reporter Shavonne Walker at 704-797-4253.
You Might Like

China Grove fifth-graders say thanks to a ‘priceless’ museum

CHINA GROVE — While taking me on a quick tour of the Price of Freedom Museum Thursday morning, Bobby Mault stopped... read more