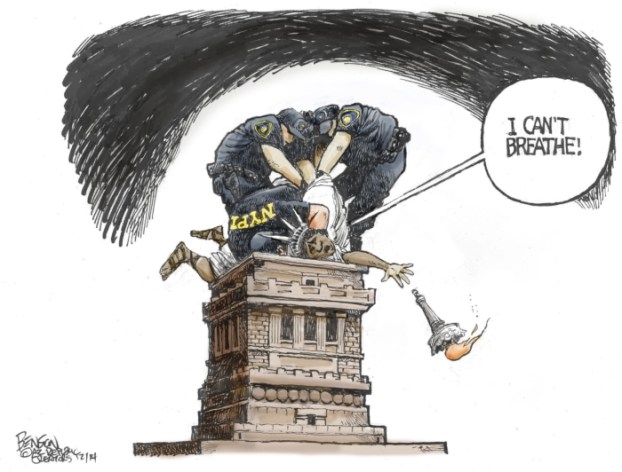 I’ve had several uncomfortable conversations after the announcement in New York  that another officer would not be indicted for killing an unarmed black man, and I’ve grown weary of the need for the dialogue.

My oldest son walked into our den as the news was being delivered on TV and, without hesitation, I said to him, “If a cop ever stops you, don’t say anything. Just lie down on the street, place your hands in a cuffing position and don’t move.”

With wide eyed innocence, my recently college-graduated son offered a simple, “OK.” I could tell by the bewildered look on his face he didn’t quite understand the urgency in my voice or the restrained, painful look on my face.

Over the next hour, my cell phone rang continuously, and my fingers strained to keep up with texts from other black fathers who also struggled to find understanding and a way to contain more anger and disappointment. In every conversation, we all shared the numbness we felt in the face of yet another example of how little value and respect is placed on black lives.

Those strong feelings were evident as I picked up the phone to share the same emotional plea with another son who sat in a college dorm room miles away from the safe confines of our family den. As I guided him through the same instructions his brother received, I could hear in his voice a mixture of acknowledgment, but also a feeling of needless overreaction on my part.

I know this because on the night of the Travon Martin verdict, I made a series of similar emotional calls imploring him to try to avoid any interactions with the police and come home as quickly as possible.

My boys were raised in a home of strict discipline, taught to be goal-oriented, and every aspect of their development — speech, attitude, behavior and dress — were closely watched.

Sadly, the other lesson they had to be taught was they exist in a society where their skin color can be a deadly detriment. In several of the calls with other black fathers, I asked the question whether white fathers were having this cautionary conversation or if they ever have to provide their children with a set of rules to ensure existence to adulthood?

As I watched the anger and frustration grow on TV, social media and in my ongoing personal conversations, I made one more phone call. This was not to a family member, but instead to a long-time white family friend whose husband is a respected member of law enforcement here.

Over the years, we’ve had great progressive conversations about race and divisive issues. We haven’t always found common ground nor mutual agreement, but we’ve always left the conversations with respect for each other’s views. So, I felt the same sense of concern as I did for my sons when I reached out to her.

As the call ended, I cautioned her about openly sharing her opinions on social media for her safety and that of her husband. I explained that the mood of some in the black community could easily escalate from respectful verbal interplay to physical violence.

Is it irrational for me to have the conversations with my kids? Not to me. I see it as teaching them survival. Sadly, I know this will not be the last time I’ll have those uncomfortable conversations. I know this because everyone is reacting from emotion, hurling accusations and inflammatory rhetoric, all while trying to win the court battle of public opinion. No one is listening to each other or trying to understand why people feel as they do.

I respect and support law enforcement, but I have no trust or faith in our system of justice. Instead of condemning me, try to understand why I feel that way.   The black community does not hate the police. They mistrust a system they feel continually fails them, and have many examples of deadly outcomes without due process. When prosecutors take away the opportunity for justice and corrupt officers are allowed to walk free, why should people of color continue to have faith while their voices are muted and value diminished?

I’ve repeatedly called for open and honest dialogue to lessen some of the racial animus that exists here. But people would rather pretend problems don’t exist, laugh when nothing is funny and scratch when they don’t itch rather than engage in real dialogue. Attorney General Eric Holder pegged it correctly when he said we are a nation of cowards when it comes to discussing race.

The results of our cowardice can be seen in the riots and protests in cities across this Country.

Kenneth Hardin lives in Salisbury. Contact him at khardin@fibrant.com.

Eric Garner was not a threat to anyone