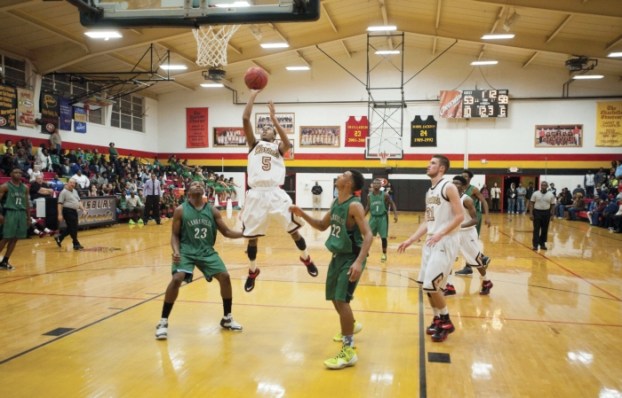 SALISBURY — It’s too soon to take the Salisbury boys basketball team’s temperature, but things are heating up on Lincolnton Road.

The Hornets won for the fourth time in five games Thursday night when they held off A.L. Brown, 61-56, in their home-opener.

“A year ago, when we were mostly sophomores,  I don’t think we could have finished the way we did,” coach Jason Causby said. “So we’re seeing growth. That’s all you can ask for.”

It felt like a gut check with a capital G to several Salisbury players. SHS squandered a pair of 10-point, first-half leads and held a 54-42 edge after junior Wes Fazia scored on a fastbreak layup with 3:43 remaining.

“I think we showed a lot of character,” the 6-foot-7 Fazia said after netting 15 points. “Even though we lost those leads, we made our free throws when we had to. This was a really good win.”

It was a knuckle-to-knuckle match, particularly in the second half. Brown (1-2), which trailed 28-20 at halftime, emerged from its locker room with renewed vigor and spark. The Wonders took their first lead since the early going when junior guard Damon Johnson stole a pass and raced home for a layup, putting the guests ahead 34-32 midway through the third quarter. Later they regained the lead when Jaylon Neal threaded a fadeaway jumper from the left side — and wound up on the seat of his pants.

“We have all this talent,” Johnson said after a 12-point effort. “We just need to play together and use that talent more than we did tonight.”

Salisbury appeared in mid-season form as the third period ticked to a close. DeShawn Troutman’s runaway layup sandwiched around a pair of Will Leckonby 3-pointers just 40 seconds apart gave the Hornets a seven-point advantage.

“Will’s by far our best shooter,” Causby said. “He’s a 10th-grader, so you’re just now getting a little game-savvy. He’s got a fluid shot.”

The Hornets used a stickback by Leckonby, who totaled 11 points, and a bucket by 6-4 junior D.J. Alexander (15 points) to take another double-digit lead early in the fourth quarter. And when Fazia took a bounce pass from Alexander and hit his pivotal layup — their final basket — they were threatening to run away and hide.

“Yeah, but Kannapolis is a tough team,” Alexander said. “They gave us a good battle. We wanted to move more up front, but they kept fronting us. Fortunately our guards did a good job getting the ball to us when we needed them to.”

The Wonders staged a ferocious comeback in the closing moments when they routinely snagged offensive rebounds and created second and third scoring chances. They inched as close as 56-53 when Johnson drained a 3-ball from the left side with 1:56 to play. Salisbury withstood the charge by slowing the game’s pace and converting seven of 10 free throws down the stretch.

“When we learn to play the whole game as hard as we did in the last four minutes, we’ll be a much better team,” said Brown coach Shelwyn Klutz. “We can’t play hard in spurts.”

Causby simply appreciated the Hornets’ late-game fortitude. “We’re getting tested early, which is a good thing,” he said. “Our schedule is tough from top-to-bottom. There aren’t any gimmes.”

LANDIS — On paper, it was dream matchup — Rowan’s County’s two most experienced girls teams going at it. But North... read more