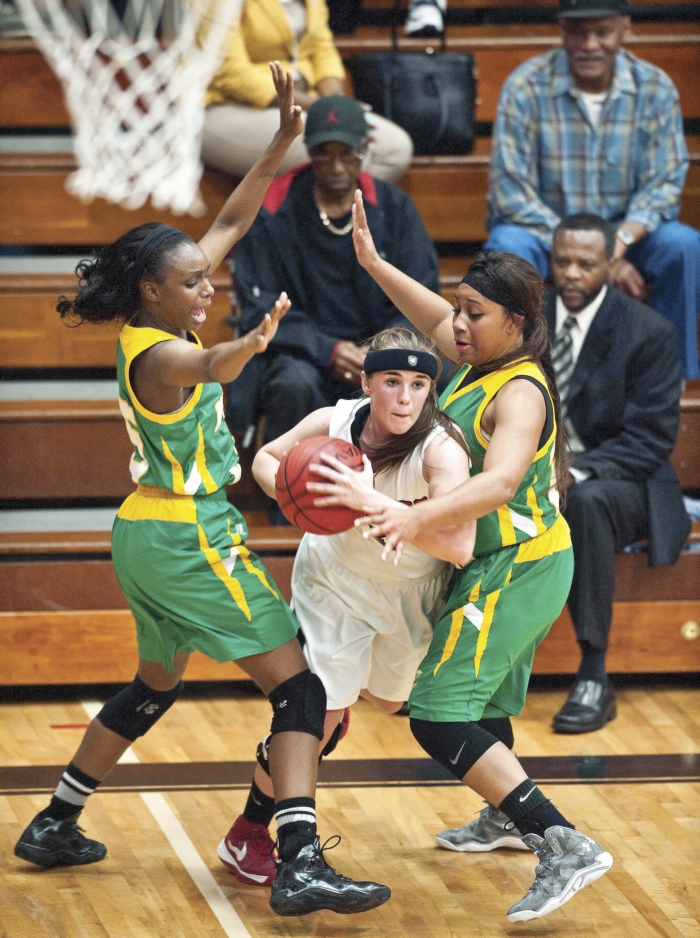 LANDIS — On paper, it was dream matchup — Rowan’s County’s two most experienced girls teams going at it.

But North Rowan is faster, deeper and healthier than South Rowan at this point, and the Cavaliers crushed the Raiders 78-48.

“South Rowan is very dangerous,” said North Rowan’s springy forward Aliyah Farmer, who had nine points in the first quarter. “But we  were talking on the court, and we’ve really been working on our pressure defense.We’re not big, but we played hard and rebounded hard.”

North Rowan scored 25 points in the first quarter and 27 in the third quarter when its starters got most of the minutes. That’s a 100-point pace.

“We’re not going to be as good offensively as we were tonight, every night,” North Rowan coach Brian Lytton said. “But defensively. we should never have a bad game.”

South Rowan’s Cassidy Chipman was awarded two technical free throws early  and made them for the Raiders’ only lead. North Rowan scored the next 16, and it was never a contest.

“I saw South Rowan’s game with Concord on Tuesday, it was very physical, and I’m sure they were a little beat-up tonight,”  Lytton said. “But we took South  very seriously, and we came out and played really well. When we shoot well, we can be really good, and tonight we shot the ball well.”

North Rowan (2-0) made five 3-pointers and hit quite a few mid-range shots, but its bread-and-butter was generating offense from its defense. The Raiders (2-1)  struggled to handle North Rowan’s traps and trailed 40-25 at halftime.

“We’re not going to make excuses, but we are awfully banged up,” South Rowan coach Jarrod Smith said. “We had four ankles in ice buckets today, Malaysia Williams was out ,and we didn’t know if Cassidy would be able to play until game time. Then we got off to a terrible start with a lot of turnovers.”

North Rowan got balanced scoring from its veteran standouts with Farmer scoring 16, Special Washington 15, Ashley Blaire 14 and Demeria Robinson 12. Egypt Alexander scored eight and was a force inside, especially early.

Chipman bombed four 3-pointers and scored 23 to lead South Rowan. Avery Locklear, who was averaging 24.0 points per game, was held to 18. Caroline Hubbard hit an early 3-pointer, but South Rowan got only seven points from players other than Chipman and Locklear.

“It’s not like South Rowan’s not a good team — they are,” Blaire said. “But we came to compete tonight and we played really well together.”

When Kayla McClendon scored for South Rowan early in the fourth quarter it ended a drought of about 22 minutes for Raiders other than Chipman and Locklear.

“We didn’t play as well as a team tonight as we did in our first two games,” Smith said. “We got behind and then everyone was trying to do too much themselves.”

North Rowan moves on to another tough challenge, On Thursday, the Cavaliers entertain 4A Ardrey Kell.