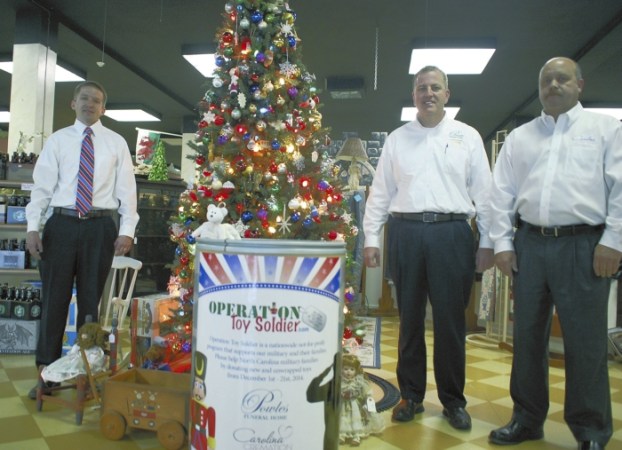 The funeral home, based in Rockwell, has placed toy collection barrels at seven different locations in an effort to provide gifts for children of deployed, non-deployed and recently returned N.C. military personnel.

“The families sacrifice just as much as the soldiers do,” said Russ Roakes, a funeral director at Powles.

The new, unwrapped toys that are collected — the deadline is Dec. 21 — will be transported to the USO offices in Charlotte, which will then distribute the toys to military families regionally, including those in Rowan County.

Powles funeral directors Roakes, Will Staton and Doug Bare stopped by Salisbury Square Antiques & Collectibles at 111 S, Main St. Wednesday morning to explain the program and check in with owner Von Poston. Toys already were starting to fill the specially wrapped barrel at the front of Salisbury Square, next to the Christmas tree.

Around the corner, at 108 W. Innes St., Made Man Barber & Shave also had an Operation Toy Soldier barrel near the front of the shop. Master Barber Brian Hunt said there was no hesitation when Powles asked permission to place a collection barrel there.

Powles is hoping the toy collection, which is part of a nationwide initiative by Veterans Funeral Care, goes as well as its U.S. flag collection boxes, located at the funeral home, Uncle Buck’s and Man Made Barber & Shave.

Over the past year, the Uncle Buck’s flag collection box alone has received about 400 flags from people looking to dispose of their used flags properly, while also providing flags used during Powles’ burial or cremation services for veterans.

“We want this to be a community-wide event,” he said.

In only two days, the toy collection barrel at the funeral home is overflowing, the men said.

Other locations for the toy barrels include Uncle Buck’s in Salisbury, A&L Mini Mart in Faith and Ace Hardware in Rockwell. In addition, an Operation Toy Soldier barrel will be available Dec. 12 when the Piedmont Players’ youth production, “A Seussified Christmas Carol,” opens at The Norvell on East Fisher Street.

Theater-goers are being encouraged to bring a toy, if they want.

If a business or organization doesn’t have one of the specially wrapped collection barrels but still wants to accept toys for military families, Staton said the funeral home will be glad to pick them up.

“We’ll pick them up no matter what,” he said. “Any unwrapped, new toy, big or small — it doesn’t matter.”

Matthew Brown prepares for his organ recital at Westminster Abbey