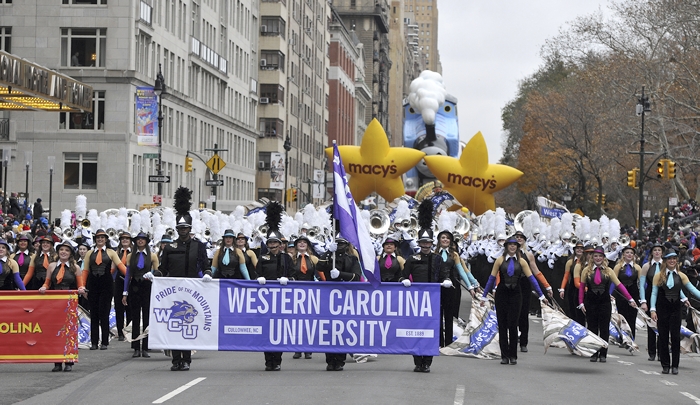 Western Carolina University’s Pride of the Mountains marching band students are parade pros – most of them have been parade regulars since high school or even earlier. But last week, they were able to take their parade experience to a whole new level when they led the parade of all parades – the Macy’s Thanksgiving Day Parade.

“The parade was just amazing,” Jamie Parham, a South Rowan High School graduate, said. “You could just hear everyone cheering as we went by.”

Band members have been preparing for the Macy’s Thanksgiving Day Parade since April 2013, when they found out they would be performing. The week before the parade, a semi truck proudly displaying the band’s logo and filled with uniforms and instruments left Cullowhee bound for New York City.

The band left the following Sunday and traveled overnight, arriving in New York City just in time for a breakfast cruise on the Hudson River accompanied by their first look at the Manhattan skyline.

Interspersed between band meetings and rehearsals, the Pride of the Mountains took advantage of the opportunity to explore New York City, and soaked in Central Park, the Empire State Building and a Rockettes Christmas show.

“Most of the trip was a lot of free time that they gave us to wander around the city,” Hoffman said.

They even had the opportunity to see “Aladdin,” “Les Miserables,” “Lion King” or “Pippin” on Broadway.

“I don’t even know how to describe it without using the word fantastic,” she said. “The set was gorgeous.”

On Wednesday, the band was supposed to hold an outdoor rehearsal, but had to cancel it due to frigid temperatures and rain.

“We rehearsed in the hotel’s ballroom instead,” Day said.

The rehearsal ended around 9:30 p.m., and with a 1 a.m. wake up time, the students were faced with the difficult decision of sleeping or not sleeping.

After a 30-minute rehearsal for TV, the students went to Applebees for breakfast and to kill some time. There weren’t enough seats for all 500 band members, so people were sitting on the floor and on steps – some even fell asleep, Piatt said.

After the stint at Applebees, the band members made their way to the beginning of the parade route around 6 a.m., and stood outside in the snow until the parade started at 9 a.m.

As they stood outside, they got to talk to the spectators who had been standing outside since 5 a.m.

“It was cold when we started out in the morning,” Parham said, but added that once the parade started and they began marching, the weather was actually pleasant.

“The whole parade just felt like a dream,” Hoffman said.

“The parade wasn’t exhausting at all. It was actually really fun,” Piatt said. “It only lasted an hour, I thought it was going to last longer than that.”

The band alternated playing Journey’s “Don’t Stop Believing” and Western Carolina’s fight song throughout as they marched through the streets of Manhattan, and “I’ve seen the Lights Go Out on Broadway” by Billy Joel for millions of television viewers at the end of the parade route.

“You could hear them singing with us as we played,” he said.

“It’s not like your hometown parade,” Day said. “In New York, everyone is constantly cheering.”

“We couldn’t really hear anything except people screaming,” Hoffman said.

“They were cheering like crazy. I don’t think I’ve ever been to a parade where we’ve been cheered on that much,” Piatt said. “There were people shouting and signs everywhere and taking pictures.”

At one point in time, the band fell two and a half minutes behind schedule.

“We weren’t going to make TV at that point,” Hoffman said, recounting how their band director told them to “stop playing and run.”

“We caught up a minute and a half in one block,” Piatt said.

“We made TV just because of that,” Hoffman added.

Day said the most memorable moment of the parade for him was performing in front of the cameras, as a culmination of all their hard work.

“I’ll remember that moment when we were in front of the cameras,” he said. “I think we rocked it. I think we did really good.”