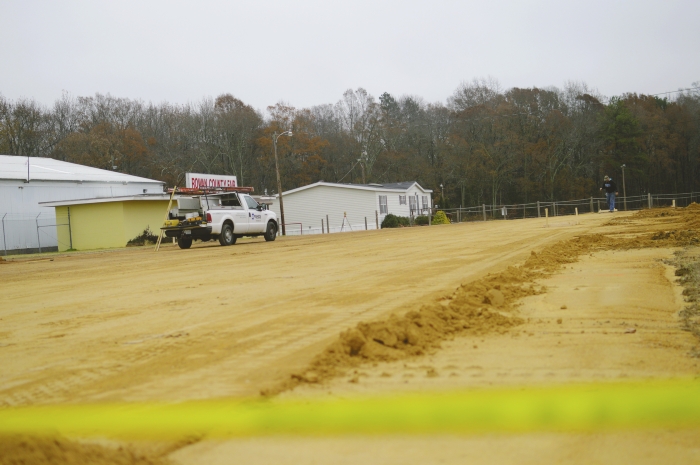 Josh Bergeron / Salisbury Post - Lafave's construction employees work on a new multipurpose building Wednesday at the Rowan County Fairgrounds. The building is expected to be finished in four months and hold 450 people.

Construction has begun on a multipurpose events center at the Rowan County Fairgrounds that could fit upwards of 400 people.

A building permit, issued by the Rowan County Building Code Enforcement Department in early November, puts the site at 9,600 square feet. The permit values the new building addition at $421,000. Construction is estimated to take about four months, according to Rowan County Fair Manager Johnny Love. The building was entirely paid for through a benefactor, who Love didn’t name.

Love said the process of building the events center began about two years ago.

“[The benefactor] came by one day just asked,” Love said. “We were telling them what we envisioned in the future
and that would be something way down the road. With the donation, they put the wheels in motion.”

Workers from Lafave’s Construction, which was issued the building permit, were at the fairgrounds Wednesday afternoon, taking measurements and marking dimensions of the building. The building’s footprint has already been graded.

The building will the largest at the fairground and only one with heating and air conditioning, Love said.

It will be at the front of the fairgrounds. Randall Barger, the Fairgrounds’ events manager said the interior would have a kitchen, office space and bathrooms, while a large portion of the building will be open space for events.

“We are trying to bring more events to Rowan County and to the fairgrounds,” Barger said. “By having a building which has heating and air, that part helps us bring in various events. There are very few buildings that you can seat over 400 people in Rowan County.”

Barger and Love both mentioned wedding receptions as a potential event that could use a space capable of fitting 400 to 500 people.

“It will be a building you can use year round so hopefully the community will come out sand see the benefits also see the fairgrounds,” Love said.

During the Rowan County fair, Love said the building would likely be used for various exhibitors. He also used last month’s state Future Farmers of America dairy competition as an example of an event that could utilize the new building.

Love said that at its peak, the fairgrounds were rented 30 or weekends per year to outside groups. The number of rentals dropped to single digits at one point, but now averages 20 to 25 per year, Love said.

“With the new building, I’m sure it’s going to help with rentals,” he said.