Girls basketball: Good night for Mustangs, Pharr and away 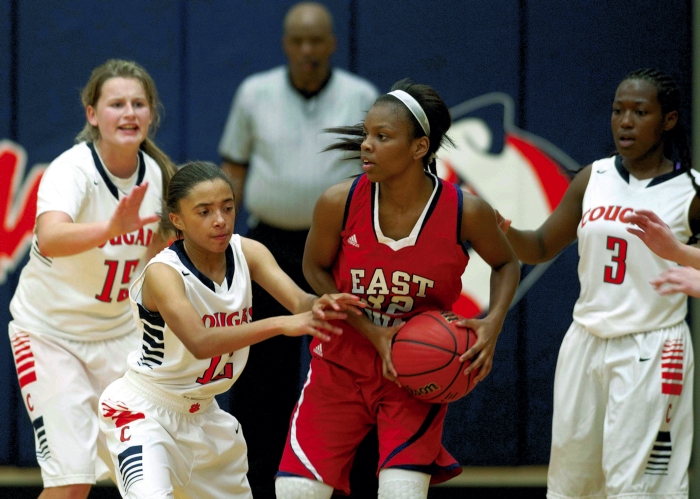 CHINA GROVE — East Rowan’s girls ended a banner 2013-14 season with a stunning loss to Carson in the first round of the 3A state playoffs.

The Mustangs had to wait a while, but they made amends on Tuesday, kicking off their new season with a 50-43  SPC victory in the Carson gym.

It was a win mostly attributable to East Rowan’s overwhelming dominance on the glass. East Rowan pulled down twice as many rebounds as Carson (1-2, 1-1 SPC).

“It was exactly what we’d talked about,” Carson coach Brooke Misenheimer said. “It’s not that first shot that beats you. It’s that second shot and that third shot. They just killed us on the boards.”

East Rowan went 0-for-8 from the 3-point line, but missed shots were like passes for the Mustangs. Kelli Fisher scored 17, mostly on stickbacks.

The rest of East Rowan’s offense came on transition points by Shenique Pharr, who had a career-high 21 points. Pharr’s high before this season was nine.

“We came in focused on transition,” Pharr said. “Getting the rebound and running the floor and stopping Carson’s transition points.”

Pharr had 10 points as the Mustangs established a 24-15 lead at halftime.

“She was able to put pressure on Carson offensively and defensively,” East Rowan coach Danielle Porter said. “She ran the floor well, but it was even more important that she was able to keep pressure on (Carson’s freshman point guard) Olivia Gabriel. She was able to wear her down some, and most of their offense runs through her.”

The other big factor for East Rowan was Kaleigh Troutman, a softball standout returning to basketball after a knee injury that cost her two hoops seasons.

“She was a blessing, and I really believe she won this game for us,” Porter said. “She played under control, she rebounded, and she made some great passes.”

Despite struggling mightily in the first half, Carson made a run in the third quarter that was fueled mostly by Sidney Huffman’s hustle. When Gabriel banked in a 3-pointer to end the third quarter, the Cougars had fought back to a 34-32 deficit.

“We missed a lot of layups, had a lot of chances to put ourselves in better position,” Misenheimer said.

East Rowan’s lead was 40-37 with 5:16 after Huffman calmly nailed a 3-pointer, but Troutman took over the next couple of minutes with the game hanging in the balance. She scored on a coast-to-coast drive to push the lead back to five, made a great pass to Pharr to make it a seven-point game and made a free throw to push the lead to eight. Then she grabbed the defensive board on a Carson miss.

“We had a big size advantage with Kelli and our height advantage paid off,” Troutman said. “We just had to calm down and set up our plays and use that height.”

Alex Allen scored 16 points for the Cougars and drilled three shots in the fourth quarter as the Cougars tried to catch up. But Jocelyn Lowe made a couple of free throws, and the Mustangs stayed in control.

“We had some first-game jitters,” Pharr said.  “It was tough starting the season with a conference game and a rival game, but we got the win.”