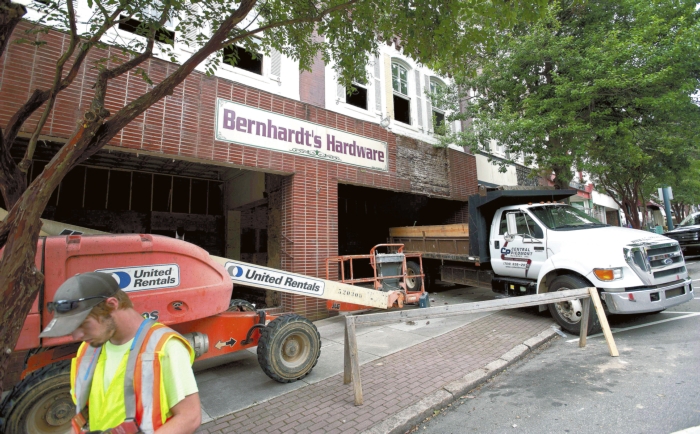 JON C. LAKEY / SALISBURY POST file photo In a September file photo, crews work on the three buildings on North Main Street that housed the former Bernhardt’s Hardware store. The front facade of two courses of brick were being removed to expose the original granite pillars.

Council unanimously approved a special use permit for the farm, which will be located off Locke Street between Brenner Avenue and Grace Street. The permit covers 32 acres of land owned by the college, but initial plans for the farm call for it to be just 400 feet by 400 feet.

The farm will have chickens, rabbits and potentially goats, which will be fenced in, according to Joe Fowler, who has helped Livingstone plan the farm. There will be a vineyard,  vegetable rows and high tunnels, which are like green houses. Composting will also be done on the farm.

“It’s going to enhance the value of everything around it,” Fowler said about the farm.

The farm will be used as a classroom, and some of the food produced there will probably go to Livingstone’s culinary school, Fowler has said.

The only condition attached to the special use permit is that livestock production cannot expand outside the initial 3.6 acre site without permission from the city.

Most of the 32 acres has been cleared, and Fowler has said there are plans to replant and landscape the area.

The city has been very accommodating regarding Livingstone’s plans for a farm. It’s amended its land use ordinance to include language about urban farms. But since an urban farm is unprecedented under the current city ordinances, the city’s planning board recommended a special use permit be approved for most urban farm practices.

During the meeting, council unanimously approved incentive grants for the renovation of the Bernhardt Building on N. Main Street. The structure, formerly home to Bernhardt Hardware, is being re-developed for commercial and residential use by Calm Holdings LLC, co-owned by Bryan Wymbs and Chad Vriesema.

The grants total $148,155 and will go toward renovation of the building, water and sewer infrastructure and fire-suppression utilities.

Once renovated, plans call for the 18,000-square-foot building to have six apartments in the upper level and 10,600 square feet of commercial space on the first floor. Part of the one of the apartments will occupy the lower, backside of the building.

Sweet Meadow Cafe, on West Innes Street, has already leased space in the building and plans to move there early next year.

Miller called the building’s renovation a catalyst, and said it will encourage other people to do projects downtown.

Council also set Jan. 6 as the date for a public hearing regarding the Complete Streets draft plan for Innes and Long streets.

The plan, developed by the consulting firm Design Workshop with input from the community and a steering committee appointed by council, lays out ways to make a 24-block area between downtown and Interstate-85 more pedestrian and bike friendly.

The boundary for the study is Innes Street from Church Street to I-85, and Long Street from Martin Luther King Jr. Avenue to Bringle Ferry Road.

The city will put the plan on its website, www.salisburync.gov, so people can review it.

Total cost to implement the plan in its current form is estimated to be about $4 million.

In other business Tuesday, council:

• Adopted a budget ordinance amending the fiscal year 2014-2015 budget in the amount of $31,893.93 to appropriate insurance proceeds for repairs to a building that was struck by a car in January.

• Adopted a budget ordinance amending the fiscal year budget in the amount of $48,120 to appropriate water tap fees from the installation of taps at the Gildan Yarns facility on Heilig Road.

• Adopted an ordinance reducing the speed limit to 25 mph on the portion of West Innes Street adjacent to Catawba College.

• Approved a contract in the amount of $183,820 to HVAC Technologies Inc. for air conditioning at Hall Gym.

• Approved a contract in the amount of $350,000, funded by the Environmental Protection Agency, to Cardno Environmental Services for technical activities and reporting as part of a three-year EPA Community-wide Brownfields Assessment Grant.

• Adopted a resolution of support for the Yadkin-Pee Dee River Basin Association High Rock Lake Nutrient Strategy Development Project, which will identify the cost of “numeric nutrient criteria” for wastewater treatment facilities within the lake’s watershed.