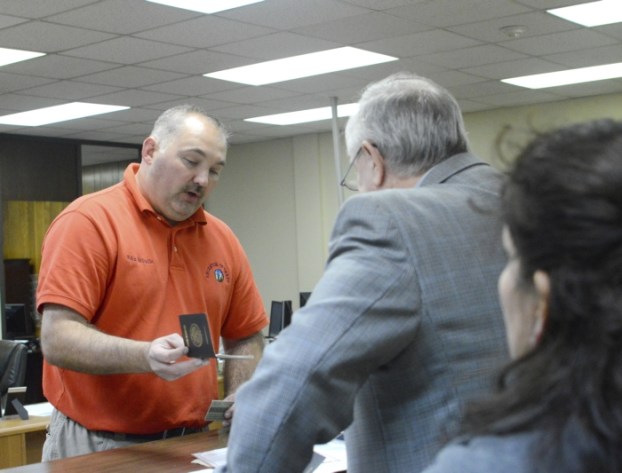 It’s only been two days, but John Brindle’s Register of Deeds Office looks a bit different than his predecessor’s.

Brindle, who was sworn into office Monday, promoted two employees from deputy to assistant register of deeds. The two employees are Vicki Eller and Shane Alderidge. Brindle also has a few ideas in mind to save money and make the office more efficient.

Brindle said one of the assistant jobs opened up because James Furr, one of the previous assistants, resigned before Brindle took office. Brindle said he didn’t know the reason for the resignation and hadn’t spoke with Furr about it.

The second job was open because Sandra Sims-Campbell was fired by previous Register of Deeds Harry Welch when she decided to run for the office.

Brindle said he wasn’t sure if Sims-Campbell would be offered her job back. He said the office would soon be at its full staffing capacity, with both of the assistant positions full and a deputy position waiting on an application to be processed.

“I haven’t talked about it with her, and at this point I’m not sure what will happen,” he said. “We’re covered in terms of our staffing.”

“If something were to happen, a catastrophe, and we lost our IT department, we would be able to refer back to our old files,” Brindle said about backing up files in Raleigh.

One of his campaign promises was to save money for the Register of Deeds’ office, which is already coming into play in the transition from Welch to Brindle.

Brindle said one of the necessary parts of the transition is changing the seal used to certify documents. Buying new envelopes and other paper documents with Brindle’s name on them could also represent an unnecessary cost, if old documents were thrown away.

“It’s not fair to taxpayers for us to just throw them away,” he said.

Instead, Brindle is using small stickers with his name to utilize old envelopes and documents until they run out. Brindle said he also saved the seals and stamps with his name on them from his previous 2008-10 term in the office, which also means new equipment won’t need to be purchased.

Brindle said some parts of transitioning to a new register of deeds still remain, but he’s slowly settling in, even digging through old, interesting records that he found prior to his election. For example, one of the records books in the Rowan County Register of Deeds Office has the signature of American pioneer Daniel Boone. Another has Boone’s father’s signature.

In addition to daily tasks, such as land transfers and marriage licenses, Brindle said historic preservation is also a part of the job.

“If that doesn’t get you excited about the records and how important it is to preserve the records, I don’t know what will,” Brindle said about both signatures. “A big part of the job is preservation.”

With three new members and a newly elected chairman, the Rowan County Board of Commissioners on Tuesday voted to continue the... read more