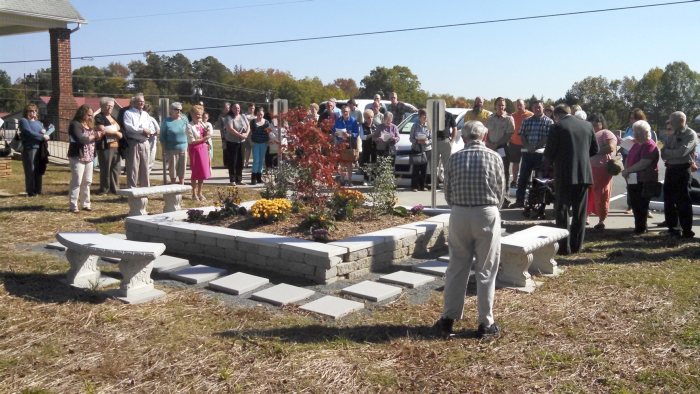 jon c. lakey / salisbury post Bobby Clement’s Eagle Scout project was to build a prayer garden as a memorial to his father Robert, a Spencer police officer who was killed in the line of duty. The prayer garden is at Liberty United Methodist Church.

Eagle Scout award recipient Bobby Clement grew up without his biological father, which sparked a unique idea for his last scouting project.

When Clement was just a few months old, his father, Spencer Police Officer Robert Clement, was shot as he helped the East Spencer Police Department serve an arrest warrant.

Robert Clement, along with the other officers, searched the house, but were unable to find the subject. When they left the house, however, Robert Clement was shot in the side and neck.

When he fell to the ground, he suffered a head injury, which caused paralysis from the waist down.

After a year and a half of suffering from those injuries, Robert Clement developed a blood clot after undergoing neck surgery. The clot eventually moved to his heart and caused his death.

A member of Liberty United Methodist Church, Bobby Clement decided he wanted to create a memorial honoring his father for his Eagle Scout project.

“He wanted something that wasn’t so typical – something the community could benefit from and use,” his mother, Lunda Eller, said.

After a large tree was cut down at the church, Clement’s uncle, Tom Hill, came up with the idea of creating a prayer garden.

Clement began asking local businesses and community members for donations in February. After lots of planning, he purchased the necessary materials and began working on the prayer garden, which was completed in September.

“We worked on it just a little bit at a time,” Clement said.

The garden is also home to flowers and a Japanese maple tree.

“I want people to be able to come sit and pray and just enjoy the beauty of the outdoors,” Clement said.

A 17-year-old East Rowan High School student, Clement is part of Troop 333 based out of St. Matthews Lutheran Church.

“Bobby is a great scout. He is very active in the troop with camping and service projects,” troop leader Mike Rowell said. “He holds the role of instructor, teaching younger scouts important skills.”

The prayer garden was dedicated Oct. 26 in a small ceremony after the All Saints Day church service. Clement dedicated the garden to “all saints,” or people who have passed away.

After graduation, Clement hopes to join the Marine Corps, following in the footsteps of both his grandfather and father. If he does not go into the service, he wants to attend Western Carolina University.

“Bobby is like his father in every way imaginable. He loves ’80s music – especially Lynyrd Skynyrd. He has a heart of gold. He is just a cookie cutter of his father,” Eller said.

“Earning the Eagle Scout award is my greatest achievement. It stays with you for a lifetime,” Clement said.