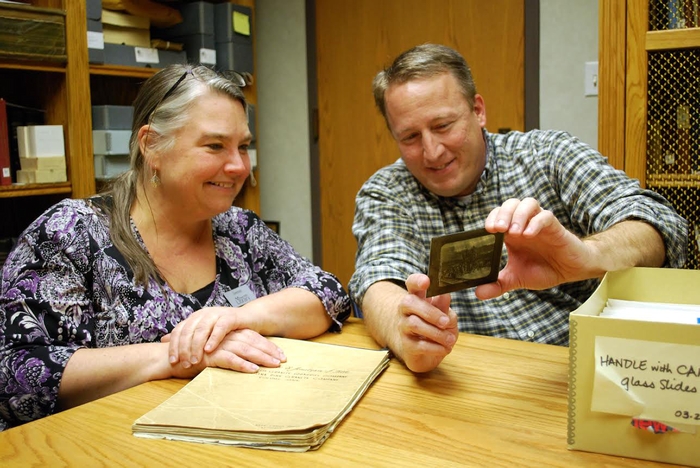 ELIZABETH ROY/FOR THE SALISBURY POST Librarians Gretchen Witt and Paul Birkhead examine a glass slide from the 'Traveling with Balfour Pink' collection in the Rare Book room of Rowan Public Library. In mid-October, after two years of research and scanning, the library launched the digital and physical exhibit containing just under 100 glass lantern slides, photos, and postcards dating from 1910 to 1930 showing the mining and installation of Rowan County's coveted pink granite blocks.

A century ago, when a mix of early automobiles and horses clacked and sputtered on city streets made of Durax granite blocks, Granite Quarry was the producer of a hot commodity: “Balfour Pink” granite.

Also known as Carolina Pink or Salisbury Pink, Rowan County’s unusual rose-colored granite drew skilled stone-cutters from as far as England, Ireland and Scandinavia to work in its mines. The granite blocks were then installed in city roads, curbs, and monuments across the country in cities including Boston, New York City, and New Orleans.

The local granite mining industry is still alive today – so much so that Witt, a Granite Quarry resident, hears the explosion of dynamite in the mines from time to time – and its history helped shape Rowan County as we know it today.

And only recently did this history come alive for the public in vivid detail.

In mid-October, after two years of research and scanning, Rowan Public Library launched its digital and physical exhibit, “Traveling with Balfour Pink.” The exhibit consists of just under 100 glass lantern slides, photos, and postcards from 1910 to 1930 showing the mining and installation of the coveted pink granite blocks.

“Many are unfamiliar with the role quarry and mining work played in our history, so we took this project to share that unique part of Rowan’s past,” said Jeff Hall, Rowan Public Library director.

“If you look at the 1910 census of Granite Quarry, you will see boarders in local households from England, Scotland, Italy, Sweden, and other countries,” said Kirchin. “My family’s story is the story of many families in the late 1800s and early 1900s.”

Paul Birkhead, Rowan Public Library reference librarian, teamed up with Witt on the fact-finding and scanning mission. Once used as sales tools by the quarry company, the glass lantern slides reveal what Birkhead describes as a snapshot of America just before World War I.

“In some ways the slides are better than photos you take today,” said Birkhead, noting the depth and detail that the slides provide.

Many of the slides had no date or location on them, and so placing the images required extensive research. And there are still a handful of slides whose locations and dates have yet to be discovered.

Among their discoveries was a slide of a granite street being laid at the 800 block of Poydras Street in New Orleans. The slide had no label, but Witt and Birkhead were able to use the few legible business names in the image to help them determine the documents – a census report and city directory – that would reveal the exact location of the granite work site.

As they researched, Witt and Birkhead became increasingly aware of just how unique the Balfour Pink collection is, and how much the granite mining industry has shaped the development of Rowan County.

“I’ve never seen anything like it, and we looked for similar projects,” said Witt. “It speaks to the people who came to the county in the early 1900s.”

And there is still so much to learn. Rowan Public Library aims to expand upon its “Traveling with Balfour Pink” collection through oral narratives and artifacts of families with histories in the granite industry. Anyone with information tying to the local granite industry’s past – photos, correspondence, stories, really anything all all – is encouraged to contact Witt.

“For as big an industry as it was, there’s got to be more stuff like this out there,” said Birkhead.

Past digital projects by Rowan Public Library that are available for online viewing include the Buerbaum postcards with images of Rowan County from 1880 to 1926, the Knox family tree containing over 3,500 names, and early maps and photos of Salisbury and Rowan County. And more projects are soon to come, Hall says.

“Part of the library’s role in Rowan County is to preserve our unique history and to share it with our citizens,” said Hall.

Whatever projects the future brings, the library’s historic investigators, Witt and Birkhead, are ready and eager to make their next discoveries.

“I never say no to a history project,” said Birkhead, smiling.

Contact Gretchen Witt with information on Rowan County’s granite mining past at gretchen.witt@rowancountync.gov or 704-216-8232.