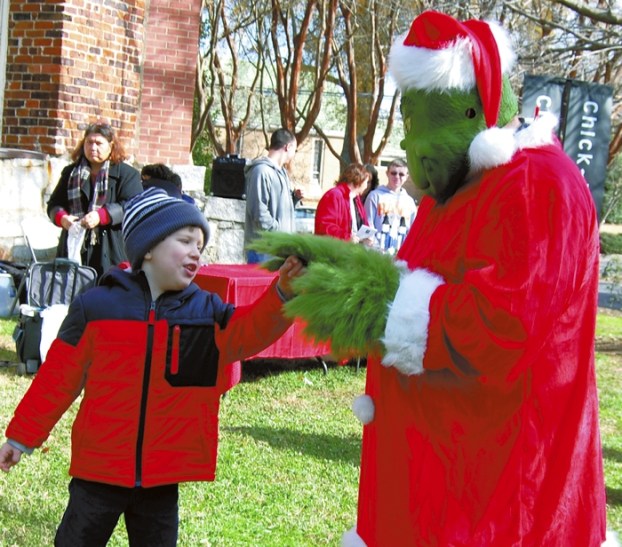 Santa and the Grinch ring in Christmas season at Bell Tower

If you saw the Grinch in downtown Salisbury Saturday, don’t panic — he wasn’t here to steal Christmas.

Salisbury kicked off the Christmas season with a bang Saturday, as more than 400 parents and children made their way to Bell Tower Park in downtown Salisbury for crafts, snacks, carriage rides and the opportunity to meet Santa and, of course, the Grinch.

She said they even started things a little early because people showed up before the event started at 10 a.m.

“I think it’s one of the few events in the community where you can get a picture with Santa,” Ruff said.

For the first time in several years, free carriage rides from Triple Springs Horse Farm were available for participants.

“The horse and carriage has been super popular,” Ruf said. “It’s been a long line all day.”

This was also the first time the refreshments were provided by local restaurants, newly opened Chick-N-Ale on Innes Street and Mean Mug, which will open on Fulton Street in the coming weeks.

Ruf said Santa and the Grinch draws people in because it’s an opportunity for them to “share in the merriment of Christmas.”

“These people come to this event every year,” she said.

In hopes of drawing people downtown, Santa and the Grinch coincided with Small Business Saturday — a nationwide movement that encourages people to shop at small, local businesses the Saturday after Thanksgiving.

“It really brings a lot of life into downtown,” Ruf added.

For many, the Santa and the Grinch event has become an annual Christmas tradition.

Amanda Savage said she’s been bringing her family since Emma, her 6 year old, was 1.

“This is kind of an annual tradition for us,” she said. “It’s something we enjoy doing.”

“I told Santa I wanted my baby,” she said.

Allison Lineberry said her family has come for the past four or five years, as her daughters, Hannah and Gracie, along with their friend, Delaney Fisher, fervently colored Christmas tree ornaments.

“I love that downtown Salisbury does this,” she said, adding, “We love that the Grinch is here. That’s a special touch.”

The Sprosty, Giddings and Valdepeñas families were experiencing Santa and the Grinch for the first time.

“We love it,” said Lori Valdepeñas.

The families traveled down to Rowan County all the way from Richmond, Va., for the Polar Express train ride at the North Carolina Transportation Museum in Spencer.

As they were looking for something to do, they found out about Santa and the Grinch through Downtown Salisbury, Inc.’s website.

For those who missed out on Saturday’s event, Santa and the Grinch will return to Bell Tower Park Dec. 13, from 10 a.m. until 1 p.m., along with rides in antique fire trucks. Bell Tower Park is located at the corner of Fulton Street and Innes St. in downtown Salisbury.

In October, Sydney Lewis set out to collect 500 cans of food for Rowan Helping Ministries. Not only did she... read more