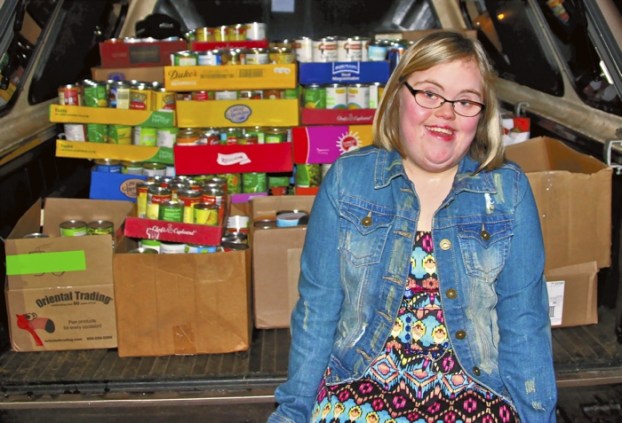 Sydney Lewis sits on the tailgate of the truck with the 1,500 canned food items that she collected.

In October, Sydney Lewis set out to collect 500 cans of food for Rowan Helping Ministries. Not only did she achieve her goal, she tripled it.

Lewis, who was born with Down syndrome, decided she wanted to “help feed the people who come to Rowan Helping Ministries.”

Her mother, Alesia Lewis, describes her as “very outgoing” and “very social,” so it’s not surprising that she launched her collection campaign by getting up in front of the congregation at Saint Paul’s Lutheran Church to ask for donations.

“I asked the church to help,” she said.

Lewis set up boxes at Saint Paul’s, and the Senior Saints and Awana groups at First Baptist Church in Rockwell pitched in to help as well.

As the boxes of cans filled up, Lewis brought them home.

“Is it okay, Sydney, if we go over your goal?” she said the church’s pastor asked.

Donations kept pouring in, and when the final count came in at Saint Paul’s Thanksgiving Eve service, there were 1,500 cans.

“We were just in awe of the outpouring,” her mother added.

After the service, church-goers created an assembly line, passing down case upon case of canned foods out the back door, down some steps and into a church member’s truck.

Lewis, her family, and several friends met at Saint Paul’s Saturday morning to pray over the food once more. Then, they formed a caravan going to Rowan Helping Ministries.

When they arrived at Rowan Helping Ministries, several church members, as well as ministry employees loaded case upon case of canned goods onto carts and wheeled them into a pantry behind the kitchen.

“That last cart was 500 pounds,” one of the volunteers told Lewis.

When the final count came in, Lewis donated 1,867 pounds of food to Rowan Helping Ministries.

She jumped up and gleefully hugged her mom when she heard the final number.

“I think she’s just thrilled with the response she got,” Alesia Lewis said. “It’s just awesome. It shows how much she is truly loved.”

More than 300 runners and walkers crossed the finish line Thursday morning at the Forum’s Butterball 5K, more than 100... read more