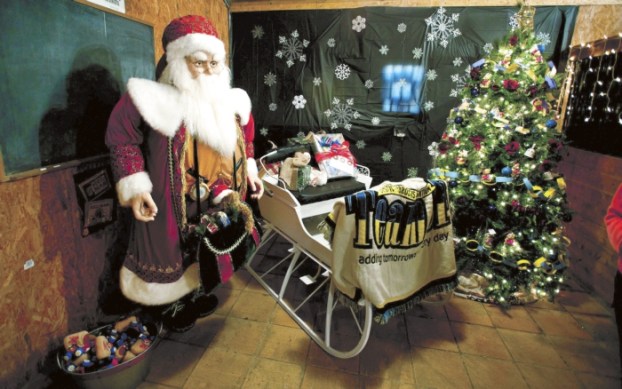 Country Christmas Tour for CF : No one does it better than the Holshousers

SALISBURY — Noah and Lane Holshouser are maybe the luckiest grandchildren around. They pretty much have free run around Derby and Linda Holshouser’s farm off N.C. 150.

Outside, the place is a fanciful world of animals, farm buildings and equipment. Derby has given the boys instruction on how to drive the big tractor, or they make their way between the early 1900s farmhouse and the barn on a golf cart. Inside the house, they often hang out in a downstairs room Linda and Derby have filled with nostalgic stuff such as a telephone booth, jukebox  and a complete restaurant booth from Blackwelder’s, which once did business on West Innes Street.

The boys usually tackle their homework after school in the TV room upstairs, which like every corner in this house has a country vibe to it,  down to the working rotary telephone on the desk.

But you really envy the childhood of Noah and Lane when it comes to Christmas. No one goes overboard for Christmas — a country Christmas, that is — quite like Linda Holshouser and her main worker elf, Derby. At last count, she has about 13 different Christmas trees of various sizes in place,  and each room and hallway is decorated so as to put you in the spirit for the kinds of Christmas everyone enjoyed as a kid — or wishes they did.

It’s all fairly seductive and the reason why the Holshousers’ house and farm at 2015 Mooresville Road will be the place for “A Country Christmas Open House” from 1-8 p.m. Saturday (Dec. 6). All the proceeds from the tour — tickets are $5 — will go to benefit cystic fibrosis research.

No one locally has done more to raise money for cystic fibrosis research than Helen Brown, whose Emerald Street yard sales over the past 10 years have raised $159,000 toward research. Brown and her husband, Ralph, have a personal stake in doing their part to find a cure for CF because their grandchildren, Anna Johnson Ward and Michael Johnson, both have CF.

Helen Brown and Linda Holshouser are longtime friends from their days in the local medical field, working decades for doctors and/or laboratories near Novant Health Rowan Medical Center. Whenever Linda had a question about something such as medical insurance, she knew to call Brown.

Now they are both recently retired. With two knee replacements and back surgery behind her, Linda says she was out of excuses when Helen broached the idea of reviving the Country Christmas Tour she had provided for Relay for Life in 2006.

“I know her as Mrs. Christmas,” Brown says. “It’s just wonderful what she’s done with this. If people don’t come, they’re going to miss a real treat.”

Besides getting a tour of the farmhouse inside, folks attending also will be able to walk the grounds outside, taking in horses and other farm animals, vintage cars and the cottage where Linda does her sewing and cross-stitch. The barn will house vendors selling homemade Christmas craft items, and it also will have homemade baked goods, beverages and chances to win door prizes.

Advance tickets are available at Pottery 101, Windsor Gallery Fine Jewelers, Spencer Doll and Toy Museum, Anne Roland Furniture or by calling Brown at 704-636-5902. The advance tickets are important in giving Brown and Holshouser an idea of how many people might be attending, but Brown stresses that nobody will be turned away and day-of-the-event tickets will be sold.

Plenty of parking will be available, and cars should enter off Mooresville Highway ( N.C. 150). They later will exit at the back of the property onto Rowan Mill Road.

Any decoration you might connect to an old-fashioned  or country-styled Christmas will be on display in the Holshouser house. Each room seems to be its own vignette, and the toys on display are not of the X-box or Playstation variety. Rather, they are things like typewriters, dolls, baby buggies, toy pianos, wagons and sleds.

“It’s a lot to look at,” Linda Holshouser says sheepishly.

All of these Christmas decorations blend in with the Holshousers’ regular country decor of antique furniture, clocks, spinning wheels, benches, baskets, braided rugs and more. Again, it’s a lot to take in. Sometimes you feel as though you’re in a scene from Currier & Ives.

Linda’s doll room in the front of the house is worth the ticket price alone. She says it’s for the daughter and granddaughter she never had. There are hundreds of dolls, dresses and buggies in the room. With all those faces and eyes, the grandsons say it’s kind of spooky.

But you have to be envious of another room where Noah and Lane sleep over. It includes a working, coin-operated mechanical horse.

The Holshousers have lived on this curve of Mooresville Road since 1982, and the stuff Linda has filled it with came from patients, family, yard sales and antique malls. The old wagon many passersby see at the front of the house during Christmas came from Dollywood.

“People who come, they might see some of their stuff,” Linda says.

It’s a monumental task to prepare the house and grounds for Christmas. After almost 46 years of marriage, Derby lets his opinion be known each year, but the couple find a way to get it all done.

“She couldn’t do it without him,” Brown says.

Down in the barn, Helen and others have decorated what she’s calling the Cystic Fibrosis Tree. It includes some special “65 Roses” ornaments from Christopher Radko, and roses are part of the other decorations. The rose symbol goes back to the story of Mary G. Weiss, who had three boys with cystic fibrosis.

In 1965, Weiss’ 4-year-old son heard his mother on the telephone trying to raise money for cystic fibrosis, but he thought she was saying “65 roses.” It became a theme for helping children with CF ever since.

“The biggest gift of all would be a cure for cystic fibrosis,” Brown says.

Linda Holshouser admires Helen Brown’s passion for this cause and thinks she’s making a difference for people with CF.

“You live so that when you’re gone, it mattered,” Linda Holshouser says.

Never one to sit still, Linda Holshouser has taken up a part-time position at maybe the most perfect job on the planet for her — the country store at Salisbury’s Cracker Barrel restaurant.