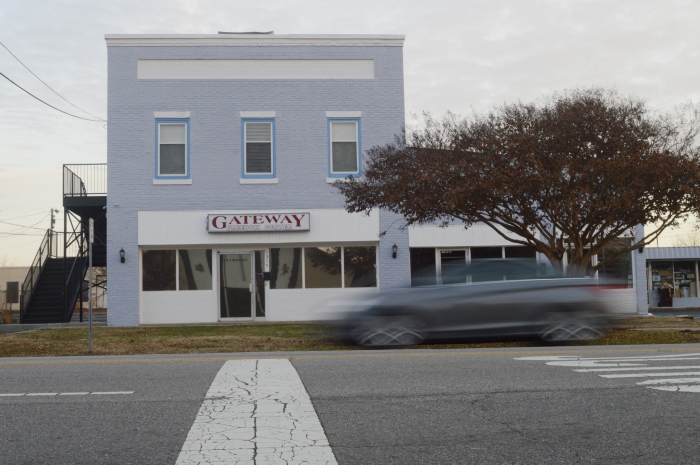 Josh Bergeron / Salisbury Post - A car zooms past the Gateway Freedom Center on Friday. The center will have its grand opening on December 6.

It was once a dilapidated building, with much of its upstairs floor simply used as storage, but on Dec. 6 the building will make its transformation official, having a grand opening and begin helping less fortunate Rowan County women residents turn their lives around.

The Gateway Freedom Center, located at 1315 North Main Street, will serve as a transitional home for locals either down on their luck or trying to alter their lives for the better. It’s been well over a year since work first began, but the center will finally have its grand opening on Dec. 6, with 16 bed spaces to serve as temporary homes as its women participate in the center’s programs.

The center will also have GED classes clothing bank and food pantry.

It’s grand opening will be 10 a.m. to 3 p.m. on Dec. 6 at the center. The opening will include a ceremony, food, religious service and dedication to individuals that have helped to transform the center.

Kathy White, the center’s director, said everything inside the building, including floors, contractors’ work, furniture and electronics came in the form of donations.

“People’s lives have changed tremendously from those meetings,” White said. “We’ve had women who walked passed the Gateway who were prostituting on the street, hailing cars down and are no longer doing that and people who were on drugs and are no longer on drugs.”

Once the center opens officially, White says she hopes the change will be even greater, on a larger scale.

The Gateway Center already has a waiting list for it’s bed spaces, but White said people can participate in some of its programs without actually staying in the center.

When it opens, she said the center will offer three different programs — three months, six months and one year — that coincide with an initial assessment.Each of the programs will focus on helping make change in the participants own lives.

“A pathway to a brighter future is our motto,” she said. “We have to find out what is your purpose in life and what are your goals. What are you trying to achieve?”

The Gateway Freedom Center’s goal is largely a reflection of the transformation made in the building. White has a thick stack of before and after pictures. The before pictures show rooms with crumbling ceilings, chipped and peeling paint and unfinished floors. Now, the building has beds, carpet, hardwood floors, kitchen appliances and fixtures just like any house or apartment.

“We’ve been working on this building for a year and nine months,” she said. “The whole building has been restored and there’s been hundreds of thousands of dollars donated to make this possible.”