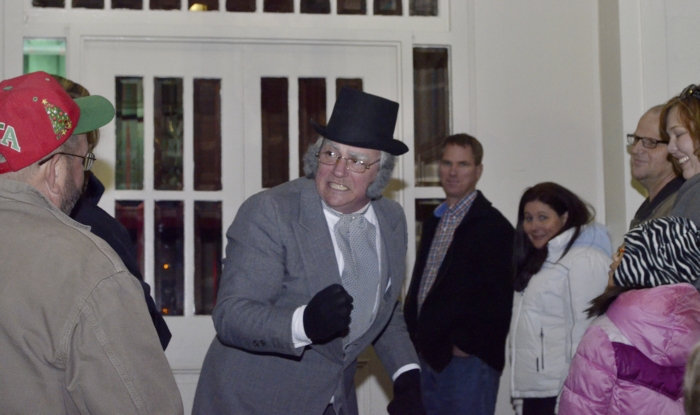 SALISBURY — For Ebenezer Scrooge, it was just another night at home.

Walking up the steps of the Hall House on South Jackson Street, the miserly old man scolded the guests who’d just ridden the trolley with him, reminding them to watch their step on the sidewalk and close the door behind them.

But moments later, everything changed.

The ghost of Scrooge’s former business partner, Jacob Marley, appeared to warn him of the fate that awaited him.

The show combines a trolley ride through downtown Salisbury historic sites with a live retelling of Charles Dickens’ classic “A Christmas Carol.”

Melissa Murguz, of the Salisbury-Rowan County Convention and Visitors Bureau, said the event is a collaboration between that organization, Lee Street Theater and the Historic Salisbury Foundation.

What started as a way to celebrate the city’s new trolleys became a hit, Murguz said.

So much so, Murguz said, that tickets for this year’s shows are selling more quickly than last year’s, with some nights already sold out.

Even so, Murguz said this year’s season will be the last ride for Scrooge and company.

“We just feel like we want to go out on top,” Murguz said, as guests gathered for the trolley tour. “And we’re looking at other live theater productions.”

Brian Davis, of the Historic Salisbury Foundation, agreed. He portrays Jacob Marley at the Hall House, which is owned by the foundation.

“We just decided we wanted to let this go out on a high note,” Davis said.

Dickens’ Christmas classic tells the story of a greedy man who learns the true meaning of Christmas.

It takes nine actors to tell the tale, with some filling different roles for different shows.

Jon Bowlby is one of two actors who play Scrooge.

His wife, Heather Wilson-Bowlby, plays the Ghost of Christmas Past. “I love that it’s reimagined, that it’s a participatory experience,” she said.

Most weekends, there are four trolley tours on Friday and Saturday nights.

And the audience gets involved, said Bob Paolino – the other actor who plays Scrooge – as he relaxed after his second performance Friday.

Asked why he likes doing the show, Paolino put on his Scrooge voice. “The money!” he said.

Actually, Paolino said he likes interacting with the people. “It’s just a unique presentation of ‘A Christmas Carol,'” he said.

Chris Sepulveda returns as the Ghost of Christmas Present – perhaps the only ghost in history to carry a glass bottle of Cheerwine in his robe.

“It’s awesome,” Sepulveda said of his role. “I like the off-the-wall nature of it.”

From the Hall House, to the old English cemetery on North Church Street, to the Henderson Law Office a couple of blocks away, the city provides the backdrop for Scrooge’s tale of transformation.

Lots of out-of-town visitors joined locals for the first night of this year’s Scrooge tour.

Sheri Crowell and her family came from Prattville, Ala. to visit family in Rowan County. “It was really neat, not what I expected it to be,” she said.

Her daughter, Kamea, 9, said the ghosts were a little scary, but overall it was fun.

“It’s a great way to use the resources of the town,” Brisson said. “I don’t know anywhere else that has trolley theater.”

Dave Storvis, of Sumter County, Fla., came up to visit family in Cary.

They drove over two hours to Salisbury just for the trolley tour, daughter Kelly Pink said.

“A girlfriend of mine saw it two years ago, and we came back,” Pink said.

And even though it’s the last year for Scrooge’s Christmas Trolley Tour, Pink said she’d come back for whatever takes its place in 2015.

For more information, call the Salisbury-Rowan Convention and Visitors Bureau at 704-638-3100 or go to www.visitsalisburync.com/scrooge.

A Thanksgiving for Edith: Siblings honor late mother by…