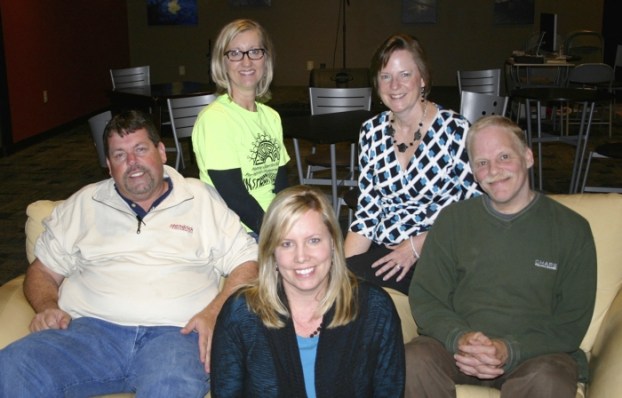 The group meeting Monday afternoon in a Kannapolis coffee shop could be any gathering of work colleagues.

But these two men and three women are talking about poverty — and how to get out of it.

“Once you take that first step down, it just seems headlong in that direction,” Ron Brown says. “Once that process starts, it’s hard to stop it.”

Brown and Jeff Hubbard are part of the first group of nine graduates from the Bridge Builders Initiative, sponsored by Main Street Mission in China Grove. Hope Oliphant serves as the agency’s community outreach advocate. She, along with the Rev. Alexis Coleman of First United Methodist Church in Landis, and Anne Corriher, Main Street Mission’s executive director, facilitated a 15-week class called “Getting Ahead,” designed to help families in poverty take steps to make positive changes in their lives.

The classes, based on the Bridges Out of Poverty program, wrapped up Nov. 14.

“I enjoyed it,” Hubbard says. “It was very informative.”

Coleman says that participants discussed the differences among economic classes.

“One class is not better than another,” she says. “There are just differences.”

Hubbard notes there are so many reasons for instability — a term the class used rather than poverty. “There’s a story behind every person.”

Brown says each participant was encouraged to set specific goals, what they called smart goals. “Not just daydreaming, but specific strategies.”

“We identified what we can do on a daily and weekly basis to achieve our goals,” he says. “As long as we’re doing something each day, we’re taking a step in the right direction.”

Brown says he took the workshop because he was in “rough shape” financially. “It helped motivate me to be aware of my community and be more involved in my community. It gave me a sense of personal achievement and pride. When I had things, I could have given to others, but I didn’t.”

Now he wants to give back.

“I feel better about myself when I wake up in the morning,” Brown says.

Coleman cautions that the classes offer no easy fixes. “We don’t tell people what to do. Students are empowered to make their own choices about what they want to do.”

Coleman is Hubbard’s pastor, and she encouraged him to take the classes he found himself in a “big financial bind” this past spring.

“Alexis was gracious enough to suggest I take this course,” Hubbard says. “It was definitely worth the 15-week commitment.”

“We all created relationships,” Oliphant says. “To see that come to an end is scary and sad.”

But it hasn’t really ended.

There are Hope Teams in place to come alongside program graduates, who will serve as encouragers and advocates, connecting graduates with people and programs to help them meet their goals.

“Hope Teams don’t come in to save the day,” Oliphant says. “Our participants don’t need heroes. They are heroes within themselves.”

“They told us, ‘We’re not gonna do this for you, but we are going to talk about ways to help yourself,” Brown says. “That felt good to me. They are encouraging me and giving me ideas, but ultimately, it’s up to me. That was real powerful to hear.”

Often, Brown says, help is given — but with some sort of obligation.

“There’s a fear about doing things differently,” he says.

“Pride is another big issue,” Hubbard says. “Many years ago, I used to ‘be somebody.’ I used to be middle class.”

“The folks in instability, they’re human,” Hubbard points out. “To be looked down on makes it worse. I don’t like it, but I do understand both sides of it.”

To have a stable lifestyle, she says, you need stability in eight of those 11 areas.

“People think, if folks could get their financial house in order, they wouldn’t be poor,” Coleman says. “But that’s not always the case.”

Hubbard, for example, wants to build up his physical stamina.

However, he knows he needs to lose weight to keep his right leg in better condition. He’s decided to join the Y and has set a goal to lose 50 pounds within the next year. Brown will serve as his workout buddy.

“I have to learn some better habits,” Hubbard admits.

As for Brown, one of his goals is to get a job. Oliphant is helping him with his resume, which he’s been sending out.

He moved to the area from another state. When he lost his job and then his car broke down, Brown found himself increasingly isolated. So another goal for him is to be more social. That includes getting involved in a church, and volunteering at Main Street Mission. Hubbard also volunteers there.

“Any time you get involved with other people,” Brown says, “you get outside yourself.”

Although the Bridge Builders program may appear to be an individual initiative, Corriher says, “it has to start with the individual, but it is a holistic approach for our community.”

Although the Hope Teams don’t formally start work until January, Oliphant is keeping in touch with the program’s graduates. On Monday evening, they all enjoyed a meal, prepared by Brown, at Main Street Mission.

During the class, Coleman told all participants: “You matter. You count. Your life means something. You have a voice.”

“For the first time in a long time,” Brown says, “I feel like I’m taking a little bit of power back.”

Carol Hallman: We live in an Advent world

Around us carols are being sung, trees are being bought and decorated, cookies are baking in ovens, and people are... read more