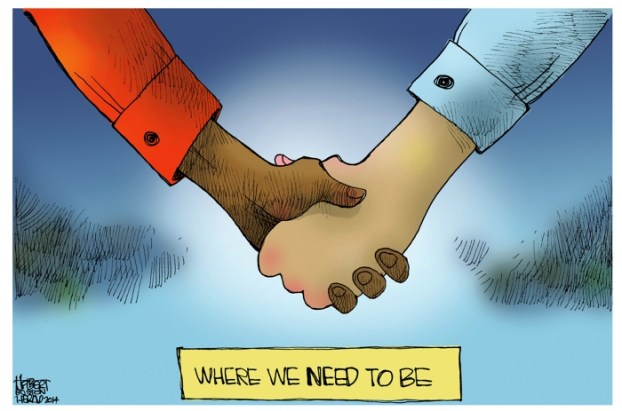 Vindication for no one

There’s understandable disappointment in many quarters over the decision by a Missouri grand jury not to indict Ferguson Police Officer Darren Wilson for the fatal shooting of an unarmed young black man, Michael Brown. After hearing testimony from 60 witnesses — some of whom apparently offered conflicting accounts — the grand jury concluded there was not enough evidence to warrant Wilson’s prosecution.

But just because Wilson will not face a trial does not mean that the Ferguson, Mo., Police Department has been vindicated or that no consequences will result from this episode. The department’s nearly all-white force and its adoption of military-style equipment and tactics are reminiscent of a long-discredited Los Angeles Police Department, which learned the hard lessons of that combination in the early 1990s, when the city confronted its most notorious instance of police abuse, the beating of Rodney G. King. The provocations of the Ferguson police continued in the aftermath of Brown’s death — the department overreacted to early protests and rolled out its heavy armor; authorities withheld Officer Wilson’s name, then released it after further protests. All of which only reinforced the doubts about the department’s competence and relationship to its community.

Some of those infuriated by the decision not to indict have expressed their hope that the U.S. Justice Department, after reviewing the case, will bring charges against Wilson. They are right to demand such a review, which is underway. St. Louis County Prosecuting Attorney Robert McCulloch — whose father was a police officer killed in the line of duty by a black man — has hardly distinguished himself in this case, and many regard him as unduly deferential to police. While federal review is called for, however, the conflicting evidence suggests that a civil rights prosecution of Wilson is highly unlikely and quite possibly unjustified. A broader federal probe into the patterns and practices of the Ferguson Police Department is far more likely to produce constructive change.

In the end, the events in Ferguson are resonant not because they do or do not add up to a crime. Rather, they have stirred such anger because they remind the nation that the lessons so brutally inflicted on Los Angeles decades ago continue to require learning. The federal government can and should force Ferguson to learn them.

“Give thanks for unknown blessings already on their way.” ~ Native American Saying   “Blessings are oftentimes not valued till... read more