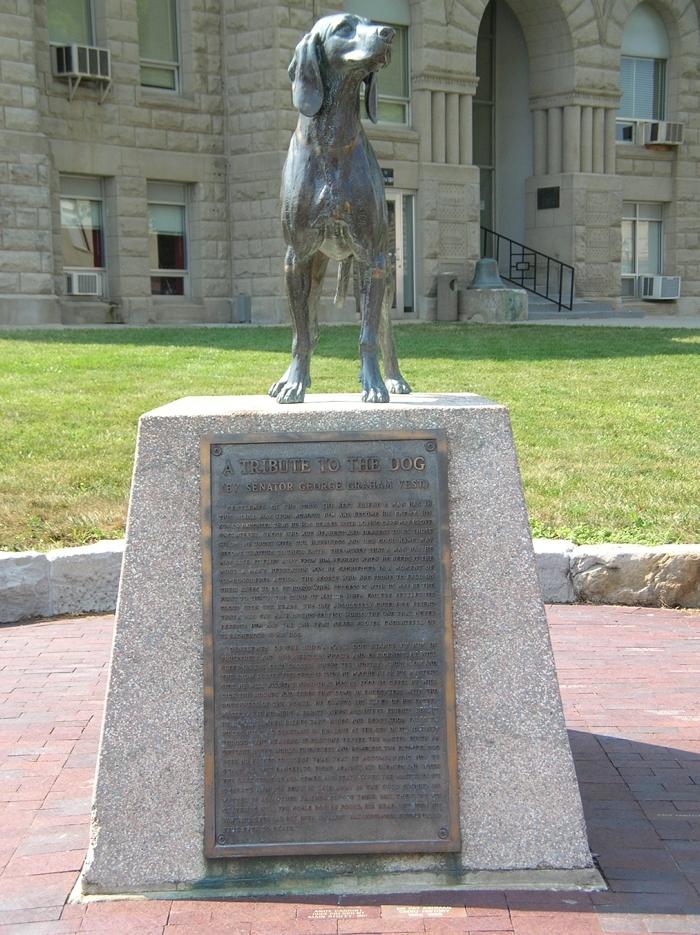 With the uncertain future of the (McCracken County, Ky.) animal shelter getting front page play twice last week, I was asked by a reader if the story was all that newsworthy.

“We have a lot of human needs in this community that don’t get enough attention,’ she said. “I don’t think dogs are quite as important.”

I could agree with only half of that statement.

“It would be hard to overstate my appreciation for dogs,” I replied. “They sometimes impress me more than people, and they deserve our best efforts to take care of them. If you don’t believe me, look up what a Kentucky native named George Vest had to say in a Missouri courtroom a while back.”

Vest, then a 39-year-old lawyer, delivered what many consider the finest tribute ever to dogs. The saying “A man’s best friend is his dog” traces back to his closing statement in a trial in Warrensburg, Missouri, in 1870.

Vest was born in Frankfort, graduated from Centre College and earned a law degree at Transylvania University in Lexington.

He moved to Missouri and set up a law practice in Sedalia.

The case that made him famous involved Old Drum, a fleet foxhound who roamed the hills of western Missouri and was a close companion of farmer Charles Burden. The hound was well-known for his exceptional tracking ability and his deep, singular voice which Burden said sounded like the booming of a drum, hence the name.

Burden sued the neighbor, and the trial became a cause celebre, playing to a packed courtroom. The defendant hired the top lawyers in western Missouri, who told the jury “it was ridiculous to make so much ado about a dog of small value.”

Vest vowed he would “win the case or apologize to every dog in Missouri.” His closing argument made no reference to any testimony or evidence:

“Gentlemen of the jury: The best friend a man has in this world may turn against him and become his enemy. His son or daughter that he has reared with loving care may prove ungrateful. Those who are nearest and dearest to us, those whom we trust with our happiness and our good name, may become traitors to their faith. The money that a man has he may lose….The people who are prone to fall on their knees to do us honor when success is with us may be the first to throw the stones of malice when failure settles its cloud upon our heads.

“A man’s dog stands by him in prosperity and in poverty, in health and in sickness. He will sleep on the cold ground where the wintry winds blow and the snow drives fierce, if only he may be near his master’s side. He will kiss the hand that has no food to offer; he will lick the wounds and sores that come from encounter with the roughness of the world. He guards the sleep of his pauper master as if he were a prince.

“When all other friends desert, he remains. When riches take wing and reputation falls to pieces, he is as constant in his love as the sun in its journey through the heavens. If fortune drives the master forth an outcast in the world, friendless and homeless, the faithful dog asks no higher privilege than that of his company to guard against danger, to fight against his enemies.

“And when the last scene of all comes, and death takes the master in his embrace and his body is laid away in the cold ground, no matter if all other friends pursue their way, there by his graveside will the noble dog be found, his head between his paws, his eyes sad but open in alert watchfulness, faithful and true even in death.”

Vest’s oration — which didn’t sound so flowery in the 19th century — wasn’t just a testimonial to a slain hunting dog, but to the power of words. His brief summation filled the courtroom with tears. The jury deliberated only a few minutes. Though Burden had sued for only $150, he was awarded $500.

Cynics say it was a cheap play on sentiment, a clever lawyer manipulating the rubes in the jury box.

The cynics miss something.

Vest wouldn’t have been able to tug on the jury’s emotions without some truth in his words. He knew that most people, even those errant souls who prefer cats, recognize the goodness of dogs: their loyalty, innocence and unconditional love.

Another lawyer might have chosen to emphasize the economic value of an ace hunting dog and dwelled on the financial loss.

Vest aimed higher. He went straight for the heart and scored a direct hit.

Years later, Vest’s rhetorical skill helped him win election to the U.S. Senate, where he served 24 years. Yet for all of his national prominence, his most enduring fame was achieved the day he spoke up for a dog.

If you even travel near Warrensburg (50 miles east of Kansas City) you might stop by the Johnson County Courthouse. On the lawn is a granite pedestal with a plaque bearing Vest’s eulogy.

On top, Old Drum stands guard, larger than life in bronze, immortalized by one man’s eloquence.

Steve Wilson is executive editor of the Paducah Sun. Contact him at swilson@paducahsun.com.