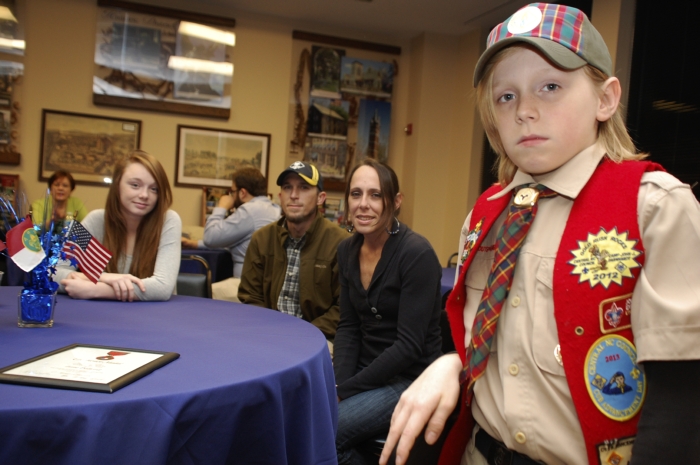 Mark Wineka/Salisbury Post Zane Pollard of Cub Scout Pack 317 recently received Scouting's highest award for heroism, The Honor Medal, for his actions Aug. 31, 2013, in waking his parents, LeAnne and Travis Pollard, from a house fire. From left are his sister, Alexis Givens, the Pollards and Zane in the foreground.

SALISBURY — It was just after 5 a.m. Aug. 31, 2013, when 8-year-old Zane Pollard awoke to the smell of smoke. At first he thought his mother must have burned something while cooking breakfast, but he soon realized the smoke was heavy.

When he reached the kitchen, the youngster saw the cabinet doors were on fire and about to fall off. The refrigerator looked as though it were melting. Zane ran into his parents room shouting “The house is on fire, the house is on fire” and started pushing on his sleeping mother’s feet and legs.

At first, there was no response from either LeAnne or Travis Pollard, or the family dogs, Pumpkin and Bessie, who were sleeping under the bed. Firefighters later concluded the parents must have been in a carbon monoxide-induced sleep, while the dogs were already unconscious.

As Zane pushed on his mother’s arm, she finally awoke and Travis stirred also. She instructed Zane to wake Bradley Griffin, a family friend who was staying overnight and also sleeping in the living room, and meet outside at the mailbox. Zane’s fire safety training with the Cub Scouts had emphasized having a family meeting place.

The Pollards survived the fire, though they lost Pumpkin and Bessie to smoke inhalation. Since then, Zane, now 9, received a Service Above Self Award from the Rowan Rotary Club for his actions the morning of the fire.

On Nov. 18, at a meeting of the Central N.C. Council Executive Board of Directors at Camp Barnhardt in Stanly County, Zane also was presented with The Honor Medal, the most prestigious of four national Scouting awards for special service to others.

The Honor Medal is presented to a Scout for saving life at extreme risk to himself.

“I was like amazed I even got it,” Zane said. “I knew I was going to get an award, but not this one.”

To even be considered for the Honor, Merit or Heroism medals or for a certificate of merit from the National Boy Scouts of America’s National Court of Honor, Zane and his mother first had to be interviewed Aug. 23 in Concord by the Advancement Committee of the Central N.C. Council.

A life-saving application had been submitted on Zane’s behalf. Zane told the committee the story behind the fire in Salisbury on Fair Bluff Avenue, and the committee recommended The Honor Medal.

“I was nervous for him,” said Debbie Guimond, Cub Scoutmaster for Pack 317, which is affiliated with Christiana Lutheran Church. “I had butterflies. I tell everybody I find this job extremely rewarding, and Zane is such an awesome kid, he really is. I’m so proud of him and what he had done.”

Zane Pollard is a fourth-grader at Granite Quarry Elementary School, where he is a honor roll student. He was recognized again Tuesday night at a special Friends of Scouting meeting held at the Rowan County Chamber of Commerce’s Gateway.

Attending the event with him were Travis and LeAnne Pollard, sister Alexis Givens and Zane’s grandmother Rhonda Gregory.

“God really had his hand on the whole family,” Gregory said.

When you lose your home, most of your possessions and two loved dogs in a fire, it’s sometimes hard to be thankful.

But Zane Pollard and his family still count their blessings, especially now around Thanksgiving.

“He hasn’t had the most wonderful life, but he’s worked through it,” LeAnne Pollard says of Zane.

The family, now renting a place in Granite Quarry, has lived in four different places since the fire. LeAnne was unable to keep her job, as most of the burden of dealing with the family’s moves and the aftermath of the fire on Fair Bluff Avenue fell to her.

But the family can’t say enough about all the help and support they received from the community, especially the Scout troop and churches which provided things such as toys for Christmas and money to pay security deposits for various rental homes.

LeAnne Pollard said the fire changed her perspective on things because that morning, in the frenzy of getting out and reaching a safe place, she thought Alexis was caught in the fire. At first, she had forgotten that Alexis was staying over at a friend’s house.

The fire did most of its damage in the kitchen and Alexis’ bedroom.

Zane received a certificate and medal for his uniform as part of The Honor Medal. The certificate says the medal is “for unusual heroism in saving or attempting to save life at considerable risk to self.”

The Pollards say their son is mature for his age and knows what he wants.

As part of earning the Service Above Self recognition from the Rotary Club, Zane received a $250 award. His father asked him what he intended to do with the money, and Zane said he would save it for college.

A Scout is always prepared.