Between feast and family, locals set out for Thanksgiving shopping deals 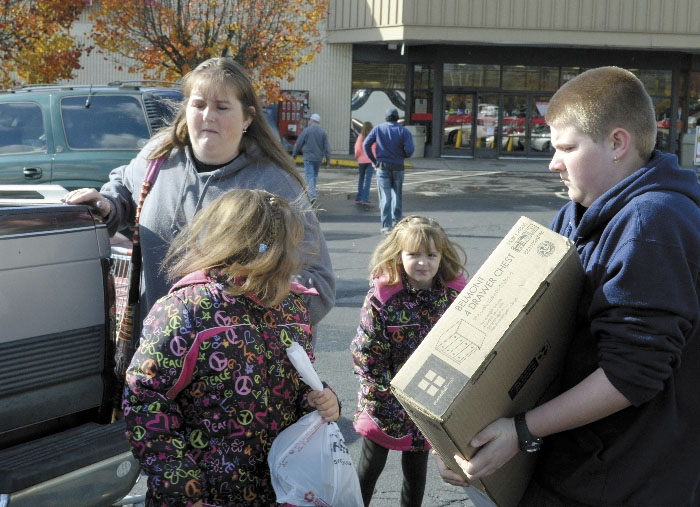 Hugh Fisher/For the Salisbury Post Mary Ann Stephens, of Lexington, said she went shopping with her children Michael, Abbie and Andrea not because of bargains, but because it was a time they could avoid the crowds.

SALISBURY – Around 11 a.m. Thursday, while many others were checking turkeys in the oven and getting ready for family dinners, Autumn Hatley and Jeff Ritchie were pushing their shopping cart out of Kmart in Salisbury.

“We got a hand mixer, a toaster, an iron,” Ritchie said. One of the items will be a gift, while the others are for use at home.

Looking at the receipts in her hand, Hatley said they’d saved about $25. “It was half-off,” she said.

Both were planning to head to family homes for Thanksgiving meals in the afternoon, but Thursday night, they’d meet to go out shopping again.

“We’re going to Walmart, and then to Best Buy,” Hatley said.

Ritchie said they started planning their Thanksgiving evening shopping “about a month ago.”

With greater competition for holiday shoppers’ dollars, major retailers around Salisbury – and nationwide – increased their hours on Thanksgiving Day.

A sales circular at the entrance advertised two rounds of “doorbuster” deals, one running from 6 a.m. to 5 p.m.

The store was set to close and reopen at 7 p.m., staying open until 3 a.m.

Kmart was scheduled to reopen this morning at 6 a.m. with another round of specials on sale till noon.

“We’re expecting it to pick up later today,” Rissew said. “We’ve got a lot of good buys. … Electronics are always a major draw.”

Remembering the long lines they saw last year on Thanksgiving, Traci Goodman said she and sister Lori Surratt decided to get to the Belk store in Salisbury a little earlier this year.

They showed up in the parking lot a little after 2 p.m., Goodman said.

“We left right after Thanksgiving lunch,” she said. Their family members knew what the plan was, Surratt said.

At the top of the women’s shopping list: “Boots,” Surratt said. “Michael Kors and Rampage.”

Those, and shirts for their trip to the Atlantic Coast Conference football championship game between Georgia Tech and Florida State University.

They said they didn’t mind standing in line, or shopping on Thanksgiving night.

“If we weren’t here, we’d be at home in a food coma!” Goodman said.

Judging by the contents of their carts, most of the people at Walmart on Thursday morning were shopping for last-minute groceries.

But that was set to change Thursday afternoon. Walmart Store Manager Mike Edwards said staff would start bringing out sale items later in the day.

“Six p.m. is the big kickoff time,” Edwards said. “We won’t close at all. The reason we don’t close is you can stand in line on the items you want to get.”

Stacks of sale papers and maps of the store were on hand near the entrance. Walmart advertised three separate “events” from 6 p.m. Thursday through this morning.

Edwards said he expected toys and electronics to be among the top sellers.

“We’ll also do a lot of apparel business tonight,” Edwards said. “Men’s, women’s and children’s, we’ve got something like 60 specials in apparel lines.”

Even as “Black Friday” shopping has pressed further into Thanksgiving, with stores like Walmart staying open throughout the day, there has been some opposition to the trend nationwide.

Facebook groups, such as Boycott Black Thursday, and numerous online petitions have garnered thousands of supporters opposed to stores opening on Thanksgiving.

Opponents of Thanksgiving Day sales say the trend is unfair to workers who don’t get to spend the holiday with friends and family.

Edwards said management treated workers at Salisbury’s Walmart to a Thanksgiving dinner a few days ago, “with turkey and ham, macaroni and cheese and all the trimmings.”

Even some of those out shopping Thursday said bargains weren’t the reason.

Mary Ann Stephens, of Lexington, brought her son and daughters out Thursday morning to buy furniture for one girl’s bedroom.

Stephens said she wanted to come out when crowds were lighter.

Jane Shuping, of Salisbury, went out to Kmart with her daughters and grandchildren to do some “window shopping” Thursday morning.

They weren’t scouting for deals, however. “This is something to do, to get out of the house,” said Shuping’s daughter, Cathy Baimont, of Wilmington.

They came to Kmart to see what was on sale, but Shuping said they weren’t out to buy – just spending some time together before heading to Kannapolis for Thanksgiving dinner.

“Thanksgiving is about family,” Baimont said.

And the real shopping trip, she said, would wait for “Black Friday.”