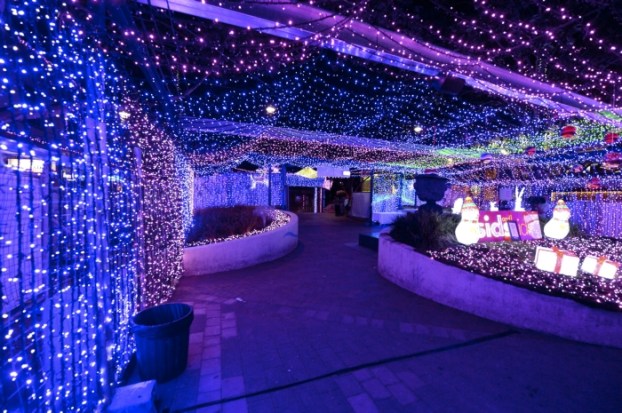 Lights twinkle in a mall in Canberra, Australia where David Richards has set a Guinness World Record by stringing up almost 1.2 million Christmas lights in the center of the national capital, Thursday, Nov. 27, 2014. Guinness World Records on Friday confirmed that the 120 kilometers (75 miles) of multicolored wire strung in the shape of three interconnected giant, wrapped Christmas gifts was the worlds largest image made of Light Emitting Diode, or LED, lights. (AP Photo/AAP Image, Alan Porritt)

Your daily look at late-breaking news, upcoming events and the stories that will be talked about today.

The official start of the holiday shopping season begins and with it, the first sign on whether it’s going to be a happy holiday for retailers.

Dozens of people interrupt holiday shopping at major retail stores around the St. Louis area to speak out about the fatal shooting of Michael Brown.

3. WHAT PONTIFF IS FACING ON VISIT

Pope Francis is visiting Turkey at a sensitive moment for the Muslim nation, as it cares for 1.6 million refugees and weighs how to deal with the Islamic State group.

They may be allowed to remain in the U.S., but it doesn’t mean their state will let them drive a car, get an affordable education or obtain a certificate to teach school or practice law.

Despite its effect on governments dependent on oil revenues, it’s a boon for consumers as pump prices fall and lowers costs for businesses.

The holiday staple likely will cost a little more this year, and growers who survived the downturn say it’s about time.

7. HOW THE LOSING PARTY PLANS TO COME BACK

Sore from a defeat by the GOP, Southern Democrats urge a return to familiar economic policies to re-energize black voters and attract whites as well.

Rocker Scott Stapp, 41, says in a rambling video posted on his Facebook page he has no money, “not even for gas or food.”

9. LAWYER LIGHTS UP DOWN UNDER

An attorney sets a world record by stringing up over 1 million Christmas lights along the national center mall in Canberra, Australia.

Richard Sherman gets two interceptions as Seattle beats the San Francisco 49ers 19-3 to take sole possession of second place in the division.

One word: Yuck. It’s chilly, it’s pouring and the chance of rain is going up for Thanksgiving Day. Today’s 100... read more