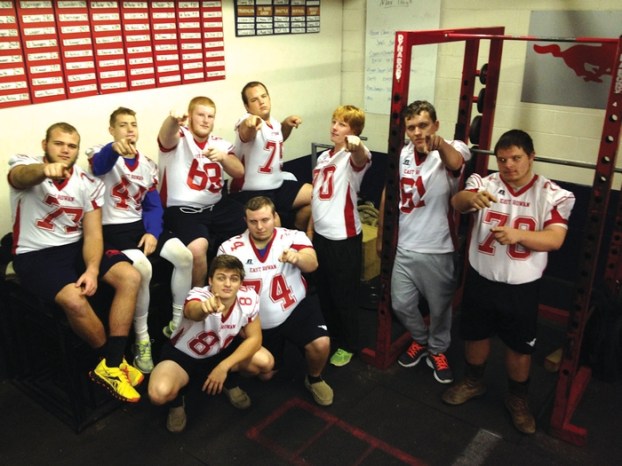 Roaming the County: The Two-Ton Posse

GRANITE QUARRY — They call themselves The Two-Ton Posse. East Rowan’s offensive line is a collection of nine players that go about their business while having plenty of fun at the same time.

In a group with its own nickname, even a few of them have nicknames.

Senior Steven Ward is called Captain America because he flies Old Glory from his truck bed. To use his own words, he “loves America” and is “all about America.”

Senior Caleb Johnson is known C.J. Rhymes because of his ability to freestyle. Thursday morning’s verse started with a line from Sugar Hill Gang’s classic “Rapper’s Delight.” The rest was all C.J.

Sophomore Baxter Ketchie goes by “Twinkle Toes.” He earned that moniker after a play against Cox Mill when quarterback Sam Wyrick started to scramble, and he got turned around. Ketchie, trying to move downfield to make a block, tripped over another player.

Senior Grant Hoffner gets picked on for being the smallest of the group. He left the fieldhouse Thursday talking about getting breakfast on the way home before eating a big Thanksgiving meal. When coach Kenneth McClamrock asked why, Hoffner said he needed to get bigger.

All of them make fun of the Wyrick brothers.

Basically, it’s easy to see the offensive line is a tight group. The guys get together each Saturday at Johnny’s Barbeque for breakfast. They talk about the previous night’s game and how the team is doing.

“It’s just knowing we have each other’s backs no matter what,” Ward said. “If one of us messes up, the others are the first to pick him up and say, ‘You’re all right.'”

The offensive line, as lighthearted as it is, knows how to work hard. Tight end Simon Soles said the guys spent time this week working on their technique, blocking until the play is over, and building the mentality of going as hard as possible on each play because it could be their last play.

The group takes its cues from McClamrock.

“Coach spends a lot of time with us, more than anybody else, so we want to work hard in practice” junior Sawyer Kimmer said.

If they don’t pass or run, the Mustangs can’t score. East Rowan has done plenty of that this year, setting a school scoring record with 434 points this season.

That high-powered offense faces a tough test Friday when No. 15 East Rowan (7-6) and No. 6 Belmont South Point (9-4) meet in the third round of the 3A state playoffs. The Red Raiders’ defense allows just 18.5 points per game, has forced 20 fumbles, has sacked opposing quarterbacks 14 times, and has picked off eight passes.

The offensive line, however, believes it can get the job done as the team tries to pull off a third straight upset.

“This week, we’re pretty confident,” senior Daniel Jones said. “We do a lot of passing, so we try to know their blitzes before they’re coming. As long as we pick it up, we’ll give Sam (Wyrick) the time to make great plays.”

Hoops by Rowan: A mix of music and basketball

The image of the athlete walking into the arena listening to music is industry standard at this point. Even without... read more