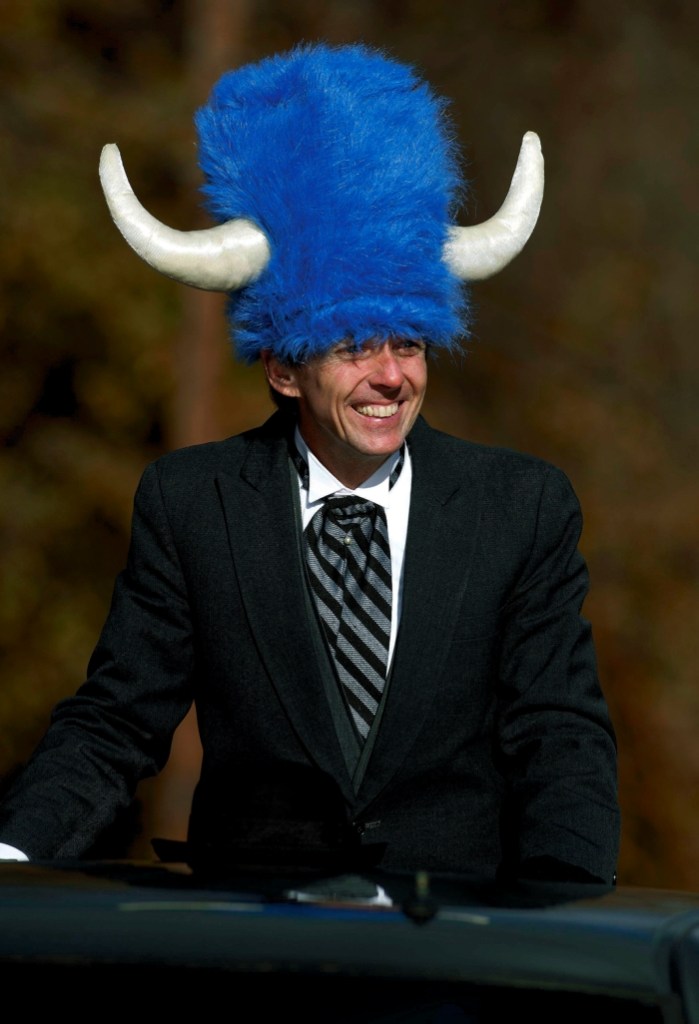 On Wednesday the Holiday Caravan Parade stepped off for the traditional start of the Christmas season in Rowan County. I was pretty excited about it for several reasons, not the least of which is that I was asked to serve as the grand marshal.

To be sure, there are many people in Rowan County who are more deserving of this honor than David Whisenant. Many, many more. In no particular order, I think of our veterans, our local emergency service workers, police and firefighters, teachers, Clyde, pastors, those who have dedicated their lives to public service in our community, Wild Bill Corriher, and on and on.

But for this year, they picked me, so I decided I would make the most of it as you can see from the outfit that I chose and the mode of transportation.

I grew up in Salisbury and have attended the Holiday Caravan Parade nerly every year that I’ve been alive. I remember as a child that my dad would always buy four seats in those sections of wooden folding chairs that were set up in downtown Salisbury. My mom would fix a Thermos of hot chocolate and we would sit and take it all in. When I was older, we would watch from the window of my father’s store on South Main Street. After the parade we went back home and Mom would fix a light dinner in anticipation of the next day’s Turkeypalooza.

I made the Salisbury Post in 1979 at the parade, along with my friends and Salisbury High classmates Jim Moorhead and Tyler Holden. We made up a cardboard sign that said “I love you,” and we held it out the second floor window of my dad’s furniture store every time that a beauty queen rode by in a convertible. I remember that most of the girls thought it was pretty funny. Most waved back, others laughed, some were creeped out, but we enjoyed it.

In the last 20 years or so, my wife Jtan and son Kyle, and then daughter-in-law Anna would join me in the WBTV Bureau on the square for a great look at the parade.

But to come back to 2014 and the real question of the day; why did they choose me?

I don’t know. Accessibility was part of it. Ralph Ketner was to be grand marshal, but then had to decline the invitation. I was available on short notice and I’m usually up for something different. I would like to think that it’s partly because I honestly do love my hometown, and as a news reporter for nearly 25 years, I’ve always tried to be fair and accurate in everything I report.

Salisbury isn’t just a geographical area that I cover as part of my job; it’s home. I’ve been fortunate enough in the past to have worked on stories that actually resulted in situations changing for the better, and that improved lives. I don’t pretend to think I alone made the difference, but it goes back to the word I used earlier: accessibility.

I honestly believe God gave me certainly abilities and skills that allow me to do my job, and I feel like I’m where He wants me to be. I’m not perfect and I don’t always get it right, but I do try to the best of my ability.

I am blessed to live in Salisbury and Rowan County, blessed to work at WBTV, and uniquely blessed to be the Grand Marshal for this year’s parade. I hope you went out and enjoyed the show. If I could have found that sign I made thirtysome years ago, I’d probably have waved it, too.​

David Whisenant is a WBTV bureau reporter covering Charlotte and all points north including Salisbury, Concord, Kannapolis and “wherever they send me.”