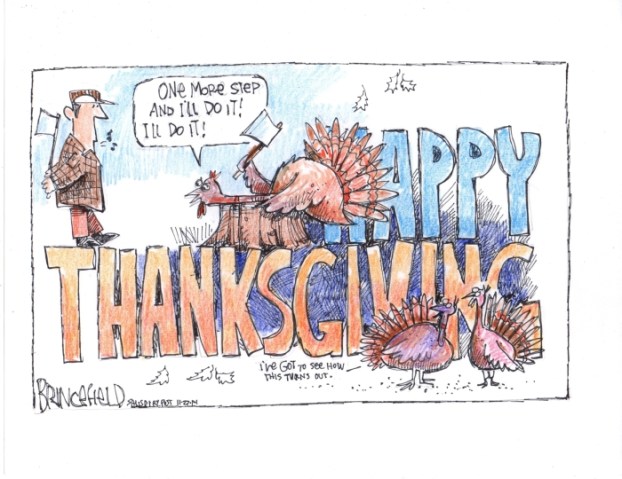 Things to be thankful for in Rowan County this Thanksgiving:

• More jobs. Manufacturing is going strong in Rowan again. The Freightliner plant in Cleveland has a goal of adding 1,000 jobs this year. Gildan Yarns is opening plants in Rowan and Davie. September’s 6.1 percent unemployment rate means too  many people are still out of work, but this is an improvement. Think back to January 2010, when the rate hit 14 percent. That was nightmarish. This is promising.

• Growing retail. The announcement that Hobby Lobby and Dick’s Sporting Goods will open stores in a new shopping center, Shoppes at Summit Park,  cheered local shoppers and business owners alike. More stores mean more sales tax dollars going into local government coffers here instead of in other counties. The big box stores get a great deal of attention, but their arrival can help smaller stores too simply by keeping shoppers in town. And a thriving retail scene can help with economic development, according to Robert Van Geons, executive director of RowanWorks. “Whether it should be or not, corporate retail is a first-glance indicator of the economic health of a community,” Van Geons says. That goes for residents as well as prospective industries.

• Lower gas prices. We don’t know how long these prices will last, but it sure helps the wallet when you can buy gasoline for less than $3 a gallon. That gives consumers more discretionary money, which is another way to stimulate the economy. According to the Associated Press, optimism about income growth and future spending pushed U.S. consumer sentiment to a seven-year high in November, and lower prices at the pump help drive that optimism.

• Renewed spirit of collaboration. No, we can’t say that about Washington, D.C., but elected officials in Rowan are coming closer to being on the same page. And local educational institutions — colleges and public schools — have joined forces to improve literacy among both children and adults. When it comes to community improvements, everyone has ideas. It makes sense to work together.

• So much more: Having any list at all runs the risk of leaving out someone or something important. Rowan County is blessed in many ways, from natural resources to public servants, volunteers and kindnesses we show each other. Though we have our challenges, all in all, life is good.

Leonard Pitts: Wake up to injustice

In September, I received an email that should have left me feeling vindicated. It was in response to the nonfatal... read more