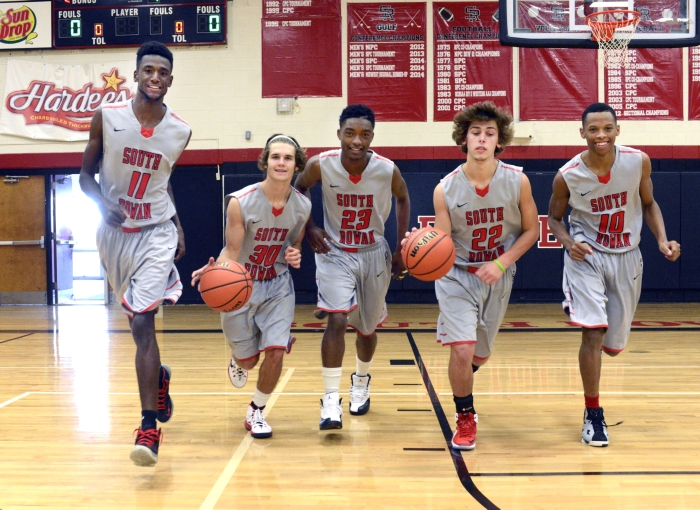 LANDIS —  Qwan Rhyne nearly made it through the football season unscathed, but he broke a bone in his shooting hand in South Rowan’s final game.

A long, 6-foot-1 senior who has made all-county and all-conference teams, the guard they call “Q”  is really the only sure thing for the Raiders. He’s a slashing, aggressive scorer with a penchant for clutch buckets. Rhyne is one of those guys who might miss an open jumper in the first quarter, but he doesn’t miss late. Often, as Rhyne goes, so go the Raiders.

Rhyne averaged 13.2 points per game as a junior and has 606 points in his career. When he returns, he’ll be the cornerstone of the Raiders’ attack.

South Rowan lost four key players from a 9-15 team that dropped seven of its last eight games. Team leader Eric Goldston will be missed as will slick guard Shawn Spry, who scored 859 points in a four-year varsity career. Also graduating was soaring  T’Vadis Wesley, a freak athlete who led the county in blocked shots. Also gone is Christian Holbrook, a promising young player who transferred.

That leaves a lot of holes, but Withers still has starting post man Lavon Hill, a 6-foot-4 athlete who can score inside, and Tireek Wilder, an athletic wing who flashed talent last season but lacked consistency. The Raiders could really use a breakout season from Wilder.

“Wilder played big (21 points) in our last game against Concord,” Withers said. “He finally played in that game the way we all know he’s capable of playing. He’s got a lot of ability.”

Wilder scored just 72 points last season, but he’ll be a playing a lot more minutes and could average double figures. Hill, who is active inside, also should average double digits as a senior if he can avoid foul trouble. You can pencil in Rhyne for 15-20 every night once he’s healthy. Those three should be good for 40 most nights, but Withers still has to find another 25. You won’t win often in the SPC if you score under 65.

“It’s the toughest league, top to bottom, that I’ve been around since I was playing at Salisbury (in the late 1980s), ” Withers said. “Teams get after it. Teams can score and teams are athletic. There are no easy games.”

Guys who were on the team last season but didn’t play a lot will be expected to take on bigger roles. That group includes guards Tyler Rary and Colson Childers and forwards Alec Stewart and Eric Finger.

Rary played well in the Christmas tournament last season. Childers is a dangerous shooter. Finger is a widebody who can bang fearlessly inside. Stewart, a receiver on the football team, is a good athlete and a tough defender.

Tre Littlejohn and Donte Hill, Lavon’s brother, were jayvees who got into some varsity games last season. They also may be ready to help.

South Rowan has two recent transfers from New Jersey who are interested in playing, but Withers said he’ll wait until their paperwork has cleared before discussing them.

“We’ve got some kids who really love basketball and we’ve got the pieces necessary to have a good team,” Withers said. “Whether we’re near the top of this league or near the bottom depends on whether or not we gel.”

South Rowan hasn’t finished above fourth in its league since 1996. It’s going to be a challenge to break that streak.

He’ll be a high-scoring horse the Raiders can ride once he’s healthy. The bad news is that league play starts right away in the nine-team SPC.

Hill has grown to 6-foot-4. He had a 19-point outing against North Rowan last season that showed his potential.

The 6-foot-2 Wilder is as athletic as anyone the Raiders have. He scored zero points eight times last season, but those days should be behind him.

Rary is going to play, and he has the skills to make his increased minutes count.

“He can really shoot and his defense has improved,” Withers said. “His playing time will depend on how smart he plays on defense.”