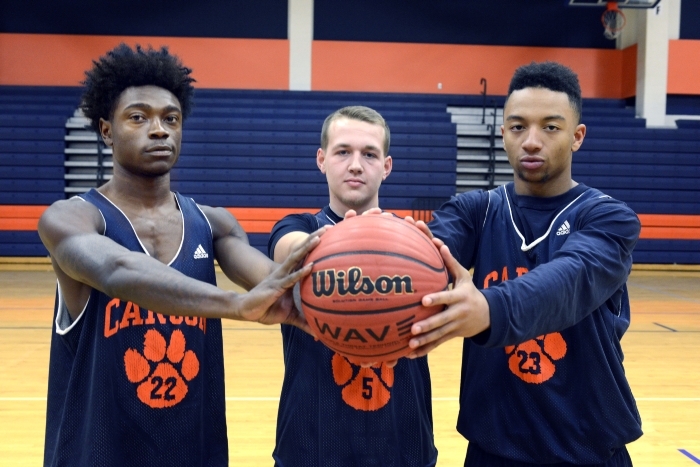 Perry has been able to focus his teaching efforts on defense and rebounding in recent seasons because the Cougars haven’t had to worry about points. Guard Tre Williams and inside-outside big man Colton Laws were offensive machines. Both had over 1,200 points to their credit when they graduated last spring. Perry lost the No. 2 and No. 3 scorers in school history at the same time.

Perry also said goodbye to MyQuon Stout, who didn’t provide much offense but provided intangibles in spades. Stout was an old-school power forward. He took charges, knocked people around with his physical strength, used his five fouls, rebounded like crazy and stuck it back when Laws or Williams missed.

“It’s difficult to lose all three of those guys,” Perry said. “No one took a charge in our first eight practices. That’s when you realize how much MyQuon meant to us. He was that leader who pulled us together when things weren’t going well.”

All three have to score more and lead more for the Cougars to compete in the balanced SPC.

With Laws and Stout gone, Carson needs size and muscle. It comes in the form of 6-foot-3, 230-pound Ryan Bearden, a junior who shined for the jayvees as a freshman but didn’t play last season. He could be the answer. Bearden does more than take up space. He’ll get boards and is athletic enough to block shots.

The other player certain to make an impact is freshman Jamarius Hairston. Hairston is 6-3, long and active, and is the most ready to play of a freshman group that Perry calls the best the school has ever had.

McCain scored in double figures in 10 of Carson’s last 12 games. He attacks the basket with quickness and body control and is more of a scorer than a shooter.

A varsity player since his freshman year, Raper scored 17 in a playoff win against West Henderson last season and had 20 and 21 in games against East Rowan and West Rowan as a sophomore. He’s also a good defender.

Rucker takes the occasional tough shot that makes Perry wince, but he usually makes up for his mistakes with hustle.

Older players will try to push him around, but if Hairston can stay out of foul trouble, he can be a double-digit scorer immediately.