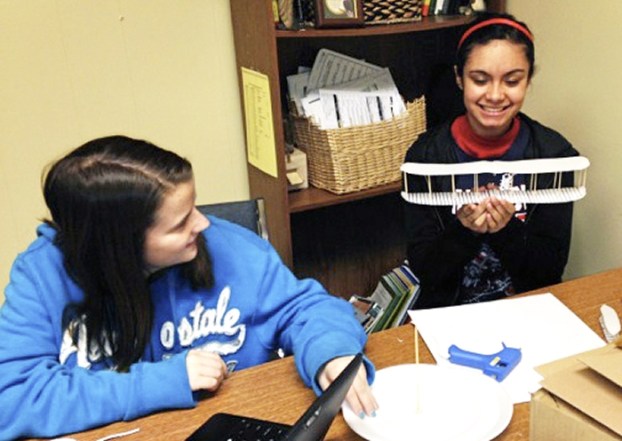 Savanna Aligood looks on as Brittney Hogan works on a model of the Wright brothers' flying machine, one of the challenges in the National Academic Challenge. Submitted.

“It was fun, but it was a lot of brain power,” said Nagy. “I think I gained brain cells and lost some.”

The students were tasked with answering 110 questions in 11 categories, including trivia, music, technology, logic and sports. The group only forfeited 10 of the 110 questions – most groups skipped an average of 75 questions.

“It wasn’t just something you could Google,” McGrail said, explaining that you might have to listen to a clip of a song and identify it or locate where a picture was taken.

That Monday, they were given four additional tasks – to take a picture at a historical place, write an essay on the causes and prevention of school shootings, build a model of the Wright brothers’ plane and write an essay about their experience in the National Academic Challenge. They chose “Fame,” the Confederate monument on W. Innes St. in Salisbury for their historic location.

North Hills’ National Academic Challenge team did so well the first weekend, they were invited to compete in the finals round the following weekend, where they were given clues based on the number of questions they answered correctly in the first round.

“We were completely down the wrong path,” Hogan said, explaining that they didn’t initially understand what they were supposed to do with the clues.

Eventually, however, they figured it out.

“It was a lot of teamwork,” Hogan said.

“It was a lot of bonding,” Alligood added.

The group honed their research skills and showed persistence throughout the process.

“It was neat to watch,” Doris Plummer said. “They would play off each other really well.”

This is the first year North Hills’ participated in the National Academic Challenge.

Plummer said she found out about the competition when her coworker received an email about it earlier this year.

Their goal was to “try to survive” this year as they figured out the format and what to expect, Plummer said.

“We did pretty good,” Hogan said, adding that their goal is a little bit different for next year.

“We want to win it next year,” she said.

“It was worth the experience,” Plummer said, adding that it gave academically strong students an opportunity to compete on behalf of the school – a spot typically reserved for athletes.

A man wanted for felony child abuse has been arrested in Buncombe County, according to a release from the Rowan... read more