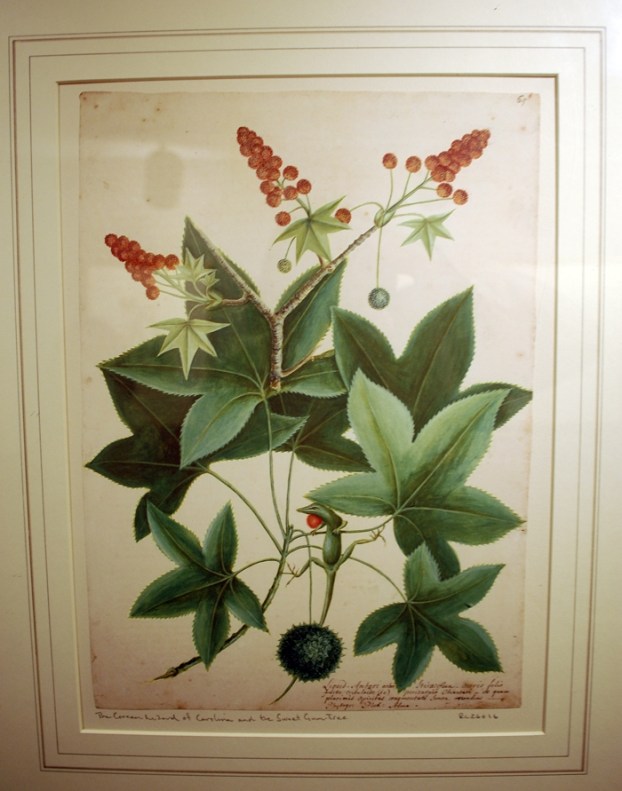 Mark Wineka/Salisbury Post A print from the Mark Catesby exhibit at the Rowan Public Library, as it appeared in Cateby's 'Natural History of Carolina, Florida and the Bahama Islands'

Library brings work of famed naturalist Catesby back to life

SALISBURY — If you were to travel to the “Antiques Road Show” and plop down before the appraiser a bound, two-volume set of  Mark Catesby’s “The Natural History of Carolina, Florida, and the Bahama Islands,” it would be a jaw-dropping moment.

The 1754 second edition of Catesby’s groundbreaking work represents one of Rowan Public Library’s  oldest, rarest and most treasured possessions. The two huge volumes are on permanent display — under glass — just outside the Edith M. Clark History Room on the third floor.

Before anyone had ever heard of Audubon, there was Catesby, an Englishman who spent 12 years sketching the flora and fauna of the New World, then the last 20 years of his life producing for the first time a luxuriously illustrated American natural history.

Through the end of December, 18 prints of the watercolor-and-gouache illustrations found in Catesby’s books are being exhibited in the first-floor hallway that links the main library to the Stanback and Hurley rooms. Gretchen Witt, librarian for the History Room, also has set up a small display case with books and other media on the life and work of Catesby.

In addition, a 25-minute DVD on Catesby is running in a continuous loop on a television leading into the hallway. A longer documentary, “The Curious Mr. Catesby,” is available for checkout at the library and, of course, you can see the two 1754 volumes of Catesby’s work on the third floor.

Every now and then, Witt unlocks the third-floor display case and turns each volume to a new page, to lessen the exposure to light. Digital images of the pages also are available on the library’s website (www.rowanpubliclibrary.org).

In honor of the 300th anniversary of Catesby’s first coming to the American colonies in 1712 and the Queen’s Jubilee the same year (2012), the Royal Library in London has been printing facsimiles of the watercolors and binding them in four volumes of calf-skin and gold leaf.

To go along with this reissue, the exhibit of Catesby prints has been traveling around the United States, raising the awareness of this important naturalist.

The exhibit came to Salisbury from Petersburg, Va., thanks in large part to John and Rosalie McLaughlin of Salisbury, who have a strong interest in Catesby and attended the 2012 celebration by the Catesby Foundation in Virginia. Witt also has been instrumental in getting the exhibit here, though Salisbury was a natural stop since the library has one of maybe 80 of the complete sets of Catesby’s work still remaining.

Catesby’s work is the crown jewel of the Craige Collection, donated to the library in 1999 and compiled by Burton Craige and his son Archibald. The entire collection contains nearly 2,000 titles, many of which are rare.

The story goes, Witt says, that Craige bought Catesby’s “The Natural History of Carolina, Florida, and the Bahama Islands” from Duke University during the Depression when the university was strapped for cash. Burton Craige, who lived from 1875 to 1945, was a Salsibury native who became well-known in Winston-Salem as a lawyer and legislator. But he also was a historian and bibliophile, as was his son.

When Archibald Craige of Charlottesville, Va., was approached about the possibility of his donating the Craige Collection to Rowan Public Library, it didn’t hurt that the library stands today on the site of the original Craige home place. Witt and Library Director Jeff Hall said it also helped RPL’s chances when Archibald Craig became disgruntled with the way the University of North Carolina responded when he offered to donate the family collection to the school.

It was the late Archibald Craige’s wish that the two Catesby volumes be placed on public display at the library. The volumes underwent some reconditioning at the Etherington Conservation Center in Greensboro, where the bindings were reinforced and the paper was deacidified. Special cases also were built for them.

In 2006, the McLaughlins and the library were cohosts for an event formally presenting the  Catesby volumes from the Craige Collection.

Special guest for that event was Leslie Overstreet, curator of Natural History Rare Books at the Joseph F. Cullman Third Library of the Smithsonian. Witt says Overstreet has made Catesby’s “Natural History” a special study of hers, traveling around the world and researching the books still in existence.

Overstreet was impressed with the library’s set, Witt says.

As a naturalist and illustrator, Catesby was credited with many firsts:

• First to place birds and animals in their natural habitats.

• First to abandon Indian names for his subjects, while trying to establish scientific names based on generic relationships.

• First to note that birds migrate rather than spend winters under ponds or in caves.

Thomas Jefferson used a third edition, published in 1771, as a key reference in his “Notes on the State of Virginia (1787).

Carl von Linne, or Linnaeus, created the nomenclature for all plants and animals and said Catersby’s descriptions or illustrations were the original source for 78 species of birds; 26 fish species; three crabs; various snakes, frogs and invertebrates; and 95 species of plants.

Catesby’s considerable research and sketching techniques were self-taught. Because he could not afford an engraver, he took lessons and did his own etchings on all but two of the 220 plates used for the first edition, published in 1747. And he supervised all the hand coloring of the prints in the first edition.

The drawings were done in watercolor and gouache, which is a type of paint in which the pigments are suspended in water. The ratio of color to water is higher, giving things a more vibrant look.

Maybe just as amazing were Catesby’s years of research in the American colonies, traveling by foot, horse and canoe — and often with Indians as his guides. He wrote once of his “diversion of hunting buffaloes, bears, panthers and other wild beasts.”

Catesby spent seven years in the colonies from 1712-1719, returned to England, then traveled back to the colonies and the Bahamas for four more years (1722-1726). All the while, he was sketching everything he saw, collecting seeds and whole plants and sending them back to England in boats when he could, catching and preparing animal specimens and writing up lengthy notes and descriptions of each plant and animal.

Back in England, he was determined to publish his own book about what he had seen and sell it by subscription, and it took the rest of his life. A practicing horticulturist, he gained some notoriety in the meantime and was elected a Fellow of the Royal Society in 1732. Catesby died in 1749, and George Edwards published the second edition in 1754.

To put it in perspective, the second edition was printed a year after the founding of Rowan County.

The color pictures in the second edition are printed from the copper plates created by Catesby. The second edition was produced mainly to provide an income for Mark Catesby’s widow and their children.

Witt says Edwards printed folios for the second edition but also used some extra sheets left over from the first edition. So Rowan Public Library’s Volume II has some pages which had been printed for the original edition.

Given time and all the attention paid to Audubon’s “Birds of America” in the 19th century, you could say Catesby was overshadowed and maybe even a bit forgotten. But over recent decades, Witt says, there has been a scholarly rebirth and appreciation for Catesby on many levels.

“People are recognizing what an amazing pioneer he was in the field,” Witt says.