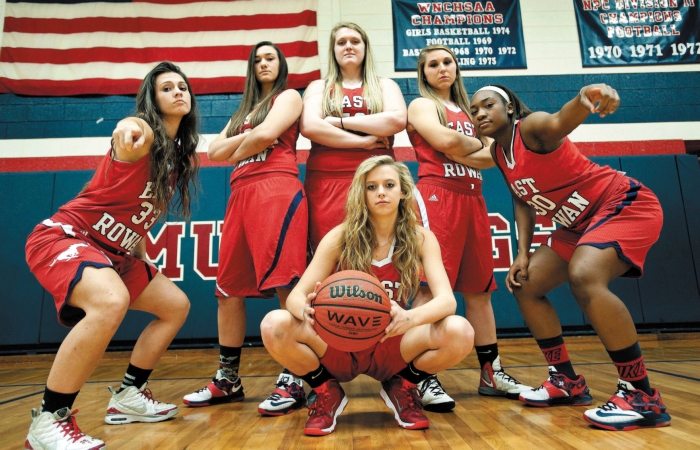 It will be difficult to match the success of last year’s East Rowan girls basketball squad, but coach Danielle Porter and her current team plan to give it a running shot.

“We lost some quality players, but we feel just as good about this year’s team,” Porter says. “That is an honest statement. I feel we are going to be just as competitive as last year if not more.”

Consider the East Rowan girls posted a remarkable 24-4 mark last year, won both regular-season and tournament titles in the South Piedmont Conference and were a top-five 3A team in the state. But gone is half of their twin towers, Karleigh Wike, who took her talents, blocked shots and rebounds to the Richmond Spiders while shooting guard Lauren Thomas also graduated.

But talented 6-foot-3 center Kelli Fisher, a UNC Asheville signee, returns to anchor the Mustangs while surrounded by experienced, talented, speedy and confident perimeter players. This season’s team will use a “four out” offensive attack with point guard Lauren Thomas, twin guards Shenell and Shenique Pharr, and versatile wing Amani Ajayi firing the 3-pointers, penetrating and feeding Fisher down low.

Off the bench they will rely on returning forward Shelby Benge (5-11) and softball star Kaleigh Troutman (5-10) who returns after a year off and is fully recovered from a knee injury. Further depth will be provided by senior guards McKenzie Eller, Lara Drew and Shelby Lowe.

Returning experience and familiarity will be a major plus says Porter

“Most years you come in and have a transition period to get everybody on the same page,” Porter said. “But it has been a seamless transition for us this year, and it is like I’ve got eight assistant coaches out on the floor. They know the system and the expectations. We have great senior leaders”

There is also unfinished business to address this year after a poor showing in the Sam Moir Christmas Classic last season. The top priority on the agenda is East Rowan’s surprising first-round 3A state playoff loss to county rival Carson. Porter said the season-ending defeat “left a little bit of angst in all” of the players and coaches.

“I really feel like still have some big goals to fulfill,” she said.

The success of the Mustangs will largely depend on her dominance at both ends of the floor. A UNC-Asheville signee, Fisher has 908 career points and averages in double figures in her three varsity seasons to date. Last year she was All-SPC and All-County, averaging 15.1 points, 10 rebounds and 3 blocked shots per game.

Lowe is a solid floor general who Porter calls “the smartest point guard” she has ever coached. Lowe averaged 6.3 points in 2013-14, but more importantly she was one of the top assist producers in the state, averaging almost five per game.

The sisters are mirror twins, one is left handed and the other is right handed. Both have great speed but are different players otherwise. Shenelle is the pure shooter (7.5 ppg) with great mechanics. Shenique is “freakishly athletic” and will lead the transition game and pressure defense.

Ajayi is a true hybrid who has played all five positions for East Rowan in her career, prompting her coach to call her “a Dennis Rodman type player.” She averaged 5.0 points last season and is a solid rebounder. An aggressive defender and slasher on offense, she will need to avoid foul trouble that has plagued her in the past.

Troutman played basketball two seasons ago before injuring her knee, then spent last year becoming a star slugger for the softball team. She adds toughness and critical depth to the inside game this season for the Mustangs.