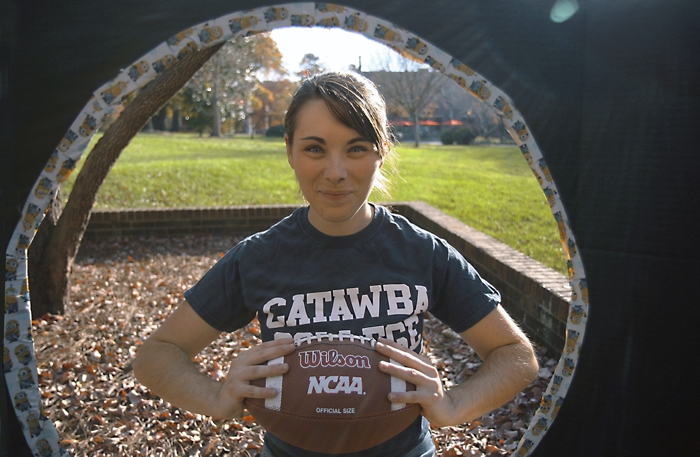 SUBMITTED PHOTO Catawba College student Rebecca Aclin has won a $2,500 Dr. Pepper scholarship and is a finalist for a $100,000 award.

Catawba College sophomore Rebecca Aclin, of Bowie, Md., recently learned that she is one of 16 finalists for a $100,000 Dr. Pepper Tuition Giveaway.

With a prize of $2,500 Dr. Pepper tuition dollars and an all-expense paid trip to compete in the finals in Santa Clara, California in December already in hand, Aclin’s busy practicing her football toss for the next round of competition that could result in an even bigger tuition scholarship prize.

“I’ve tried to recreate a two-foot hole so I can practice throwing, and I need lots of help,” she confided on a recent sunny day on Catawba’s campus.  “I plan on talking to Brian Hinson, an assistant football coach and my prescriptive fitness instructor, and asking for his help. The good thing is I don’t have to throw it like a quarterback, I can throw anyway I want and now I’m practicing a two-handed toss to at least practice aim outside of Woodson, my residence hall.”

Aclin credits her mom for nominating her for the Dr. Pepper Tuition Giveaway back in late August, but says that initial nomination was just part of the process.  “After mom nominated me, I had to share a link on Facebook and get 50 people to vote for me as a candidate for this giveaway.  Once that happened, I was eligible to submit a video to explain what I was doing in college and why I deserved a scholarship.”

She worked with a family friend in Maryland, Keith Norris, to shoot and edit her video in which she explains that she is studying therapeutic recreation at Catawba because she wants to continue to work with veterans.

Her affinity for veterans hits close to home.  Her grandfather is a veteran and so is her father, both having served in the U.S. Navy, and her uncle is a veteran of the U.S. Air Force.

Aclin also spent three years right out of high school as a performing volunteer for veterans, traveling to all 50 states with a group called Re-Creation. Re-Creation is a domestic version of the beloved traveling USO shows made famous by performers like Bob Hope and Lucille Ball.

Aclin, who graduated from high school in 2010 and then went to community college for a year, was eager to be a part of Re-Creation.

“I had known about Re-Creation all my life and I wanted to plan my career around that,” she explained. “The group’s been around since 1976, and my family’s been supporting it for over 25 years as members of FORCES (Friends of Re-Creation Extending Service).

FORCES provides small stipends to Re-Creation for food and expenses while the group is traveling and living on the road.

“Re-Creation is a very small grassroots effort that’s based in Pennsylvania and the group actually performed in my church the day I was baptized in 1992,” she said.

With the support of her family, Aclin auditioned for a role in the Re-Creation troupe and was accepted.

“They knew that this was something I wanted to do,” she said, adding, “I never said I wasn’t going back to school.  I just never said what I would go to school for. I just knew I wanted to work with vets.”

It was actually Re-Creation that brought the 22-year-old Aclin to Salisbury.  While performing with the group at the Veterans Administration Hospital here, she made a visit to Catawba College because she had researched and learned that this small school in North Carolina was one of only a few to offer a major in therapeutic recreation.

Her passion for veterans is evident and likely the Dr. Pepper Tuition Giveaway judges saw it when they watched Aclin’s video which she recently uploaded to YouTube.

“Once I made the video and submitted it,” she said, “I waited and got a call back on Nov. 5, and they told me I was one of 16 finalists. I think a lot of it had to do with my work with veterans and that I had traveled with Re-Creation for three years.”

“One of the guys on the phone was actually a vet who called to give me the news, and he said that they were impressed with what I wanted to do with my life. They were really looking for diversity and people with varied interests who really wanted to serve the community, and I think that’s what they saw when they looked at my video,” she added.

Aclin almost didn’t answer the phone when she received the call.

“I thought, ‘I don’t know anyone from Texas so why should I answer?’ and they had called me four times. I thought it was just a spammer,” she said

Dr. Pepper is sending four finalists to compete at each of four collegiate championship games.  Aclin will be flying to California Dec. 3.

The next day, she and her three fellow-competitors will be 15 feet away and try to throw as many footballs as they each can in 30 seconds through a two-foot diameter hole in an oversized Dr. Pepper can cutout.  The two finalists from this elimination round will face each other again at halftime on Dec. 5 during a Pack 12 game at 49ers’ Levi Stadium in Santa Clara, California.

Aclin gets a bit dizzy just thinking about the possibilities – a $20,000 tuition scholarship goes to the second-place finisher and $100,000 to the grand prize winner at each championship game.

Aclin is the daughter of John and Charissa Aclin. At Catawba, she is a member of the Catawba Singers, Wigwam Productions, Scholars of the Chapel, the Helen Foil Beard Society and is involved with Campus Crusade and the Residents and Housing Association on campus.  She also makes time to volunteer twice weekly at the State Veteran’s Home to help out with bingo.