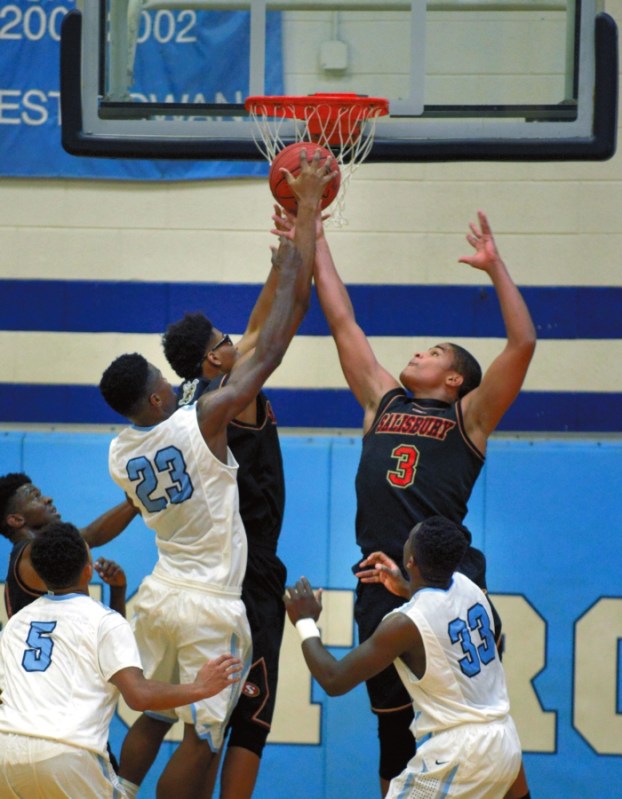 MOUNT ULLA — Salisbury found itself down 9-0 to West Rowan in the first quarter of Tuesday’s game in Mount Ulla. It wasn’t until Deshawn Troutman got a bucket plus an and-one with 3 minutes, 28 seconds left in the first quarter that the Hornets got points on the board.

The Hornets, however, closed the quarter with a 9-0 run that left the game tied at 12. The teams battled for the next three quarters, neither trailing by more than seven points. The Hornets, like they did in the first quarter, used a run as the minutes ticked away to get a 73-63 victory.

Salisbury head coach Jason Causby said the first bucket of the season is the hardest to get and so is the first win.

“All this means is we won’t go 0-24,” he said. “We trying to play and continue to get better so when we get in conference play we can get in a good position for our conference tournament and the state tournament.”

Troutman poured in 12 second-half points for a team-high 18. D.J. Alexander was right there with 17 points to go along with his numerous key rebounds. Causby said he could not say enough about how good Alexander was on the boards Tuesday by just keeping balls alive and giving the Hornets a chance.

Alexander had back-to-back baskets that gave Salisbury (1-0) its first lead of the game, a 20-17 advantage midway through the second quarter.

Salisbury took a 26-24 lead into the locker room at halftime. The Falcons (0-2) and Hornets kept it close throughout the third quarter. Martavio Rankin knocked down a pair of free throws with 5 seconds left in the period, and the game was tied at 44 at the start of the fourth quarter.

Alexander came up big during the fourth quarter. Again, he had back-to-back baskets to put his team ahead. This time it was a 48-46 lead with 7:04 left in the game.

West Rowan had a chance late. Celexus Long nailed a 3-pointer with 48 seconds left on the clock. Long made four shots from behind the arc and finished with 14 points. His last bucket cut the Hornets’ lead to 67-63. Troutman answered with a basket off a West Rowan turnover 27 seconds later to ice the win.

“They made some plays. We got to give Salisbury credit,” West Rowan head coach Mike Gurley said. “They executed and made really big shots.

“I don’t want to say we’re Indiana Jones, but we’re making it up as we go along. We got to get some minutes under our belt. We got to fine-tune some things, and we got to learn some things for the first time. …We’re just going to have to keep working.”