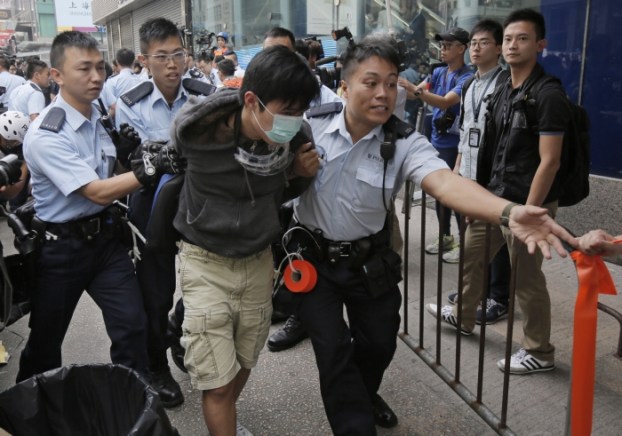 Police officers arrest a protester as they clear a protest site after warning the crowd that they would start enforcing the court-ordered clearance at an occupied area in Mong Kok district of Hong Kong Wednesday, Nov. 26, 2014. Hong Kong authorities cleared street barricades from a pro-democracy protest camp in the volatile Mong Kok district for a second day Wednesday after a night of clashes. (AP Photo/Vincent Yu)

The deployment of hundreds of additional National Guardsmen prevented a second night of riots in the Missouri town.

St. Louis County Prosecutor Bob McCulloch is being criticized for impartiality, discounting witness testimony and taking a defensive posture in the case that gained global attention.

3. WHAT SOME THANKSGIVING TRAVELERS WILL FACE

A nor’easter is complicating an already stressful travel day ahead of the holiday in the nation’s busy northeast corridor between Boston and Washington.

The future of the pro-democracy movement in the financial hub is uncertain as the government continues to dismantle demonstration sites and detain organizers.

5. HILLARY CLINTON SHOWS LITTLE OF WHAT SHE AND OBAMA AGREE ON

Aside from supporting his immigration reforms, the Democrats’ favored presidential hopeful has been mum on many policy issues the president has been vocal about.

After years of facing discrimination, the country’s Jewish population finds Rouhani’s openness to them heartwarming.

The city’s High Line draws tourists from all over the world. Developers are now looking at the Lowline –a project that would occupy a 116-year-old abandoned trolley terminal below the Lower East Side.

8. HOW TO SAVE SOME CASH WHILE HOLIDAY SHOPPING

Many apps like Retale and RedLaser will help you find the cheapest prices and clip some digital coupons this season.

9. WHO IS PLAYING OPEC’S GUESSING GAME

Trying to divine what the cartel’s members are up to in the run-up to their Vienna meeting is a high stakes puzzle for analysts and armchair geo-politicians.

Four American cities would like to host the Olympics in 10 years–Boston, Los Angeles, San Francisco, and Washington. The main thing the IOC is looking for is a budget that’s not too extravagant.

Your daily look at late-breaking news, upcoming events and the stories that will be talked about Monday: 1. UNCERTAINTY OVER... read more