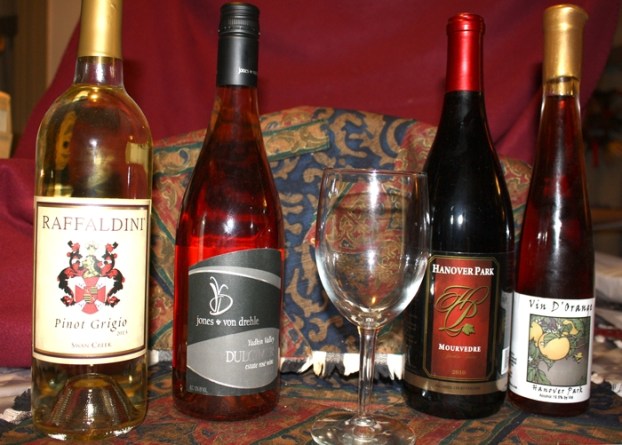 Stephen Smith/For the Salisbury Post Looking for a wine to serve with Thanksgiving dinner? Try a crisp white, a dry rose or a red blend. For dessert, something sweet and smooth.

Bob Potter of Salisbury Wine Shop says if you prefer beer with your Thanksgiving festivities, a lager or a double bock might be best to go with your meal.

For watching football later with the guys, a pale ale or IPA, if you’re feeling full. For pie, try a porter or stout.

To ensure a good nap, a Belgian style quadruple should do the trick, with about 11 percent alcohol and a certain sweetness.

What kind of wine should you serve with your Thanksgiving meal?

The kind of wine you like — white, rose, red, muscadine or European. It really is up to you.

But if you need some suggestions, or are trying to decide what wine to take to a Thanksgiving dinner, here is some advice. You’ve heard white wine with fish and white meats, red wine with beef and tomato-based pastas. That’s a start.

But what’s been very popular at Morgan Ridge Vineyard in Gold Hill has been their white syrah, their version of a rose.

“But not chilled,” said Amie Baudoin, owner of the vineyard and winery with her husband, Tommy.

They accidentally discovered that the white syrah, which they had always chilled. was even better at room temperature, like a red wine. Syrah are red wine grapes, after all.

“I think Thanksgiving is one of those pink wine meals.” Their sales of the white syrah have been great recently.

“If you’re going to the grocery store, you might look for a dry riesling or some kind of blush.”

If you’re a red wine fan, and many people are drinking red wine for health, something like a beaujolais would be good, Baudoin suggests, and it should be readily available and not too expensive at the grocery store, with the Beaujolais Nouveau just out for this year.

A pinot noir is a lighter red that would also work and is something you’ll find at the grocery store.

Baudoin also mentioned a good idea from one of their customers. The couple decided to do a wine tasting with their Thanksgiving meal, and chose three wines — 2012 chambourcin, sangiovese, which is a lighter version of chianti, and the white syrah.

Baudoin decided she would do the same thing, then she and her customer can compare notes.

Stephanie Potter of Salisbury Wine Shop says as far as whites go, Gewurtztraminer “is excellent with anything, any food served at Thanksgiving. For a red, a pinot noir or a beaujolais would be awesome, she said.  There are different levels of beaujolais.

“If you’re doing an oyster stuffing, and you want something to cut through the richness, a muscadet, a lighter varietal from France, is great with oysters. A dry riesling would also be good or a gruner veltliner, a grape native to Austria.

A riesling, she said, is spot on with anything for Thanksgiving, ham or even vegetarian. I does well with things like Brussels sprouts or cauliflower.

A sauternes would be “really nice with pumpkin or pecan pie,” Stephanie says. Or there’s a slightly cheaper version from Bordeaux, a Chateau Haut-Roquerfort. And there’s port. A ruby port would be especially good with dessert.

For Amy Helton at Hanover Park Vineyard, outside of Yadkinville, red is her first choice, all the time.

She prefers mourvedre, an earthy red wine made of mourvedre grapes and just 20 percent syrah (there it is again), or Michael’s Blend. Her husband, Michael, is the winemaker. The red blend is cabernet sauvignon, cabernet franc and merlot.

Helton also recommends viognier, a white wine with light fruit aroma and taste, mostly citrus, but dry. It also pairs well with any kind of seafood.

Port with dessert is a combination that goes way back. Ice wines are good, but can be pricey.  Hanover Park’s vin d’orange is inspired by a French rose enhanced with oranges, lemons, sugar, vanilla bean and brandy. The French drink it over ice in the summer. It’s equally wonderful as a warming sip in the winter. It could be your sole offering for dessert — no pie or cake needed — but it is enjoyable with pumpkin or apple desserts, enhancing the spices.

Many people prefer muscadine wine, and Cauble Creek, off N.C. 150, has muscadine and muscadine blends.

Cauble Creek was the state’s 100th winery and uses Carlos and Doreen bronze muscadine grapes for their white wines and Noble grapes for their reds. They range from sweet to semi-sweet. Two blush wines, a mixture of Carlos, Doreen and Noble grapes, might be your favorites with turkey and dressing. The wines are available at Salisbury Wine Shop in downtown Salisbury and at the vineyard, which is open Friday, Saturday and Sunday.

If want to find a good wine at the grocery store, both Food Lion and Harris Teeter have wine pairings on their websites to help you with your meal. Food Lion recommends riesling or sauvignon blanc, as does Harris Teeter. The Harris Teeter site says the wine you serve with dessert should be as sweet or sweeter than the dessert itself.

Please drink responsibly and enjoy your bounty and your loved ones.

When Christmas is closer, we’ll have suggestions for Christmas and New Year’s.

Thanksgiving is served at Providence Baptist

By Elizabeth Roy For the Salisbury Post For volunteers like Crystal Brown of Providence Baptist Church in Salisbury, preparations for... read more