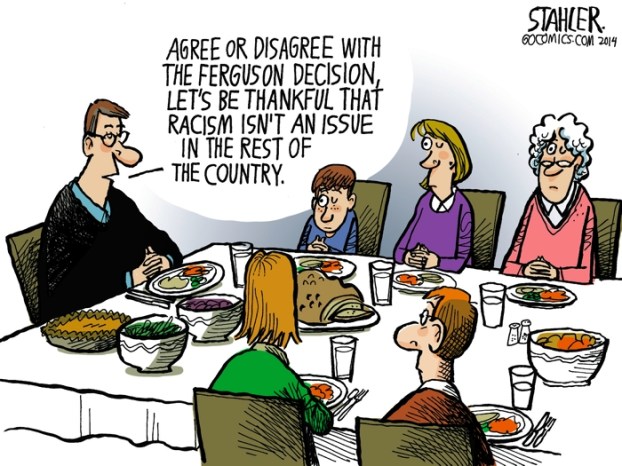 Leonard Pitts: Wake up to injustice

In September, I received an email that should have left me feeling vindicated.

It was in response to the nonfatal shooting of Levar Jones, an unarmed African-American man, by Sean Groubert, a white South Carolina state trooper. Groubert would later claim he shot Jones because Jones came at him in a menacing way. But this lie was unmasked by Groubert’s own dashcam video, which shows Jones complying with the trooper’s orders until Groubert inexplicably panics and starts shooting.

That video moved a reader named David to write the following:

“Think I FINALLY get what you’ve been saying all along. That cop just shot him down for doing nothing more than compiling (sic) with his commands. No offence to black people, but I SURE AM GLAD I’M NOT BLACK IN THIS COUNTRY! Re-evaluating my opinions of the last fifty years.”

As I say, it should have felt like vindication. But it only made me sad. I kept thinking that, had there been no camera to prove Groubert lied, had there been only testimony from witnesses and whatever forensic evidence was gathered, Groubert would likely still be making traffic stops and David would support him, his opinions of the last 50 years unchanged.

I’m glad that video helped David to “FINALLY get” what I’ve been “saying all along,” i.e., that a police officer’s mouth, to use one of my mother’s expressions, ain’t no prayer book; no source of infallible truth the way too many of us think it is. And that benefit of the doubt is something black people are often denied. And that America devalues black life. But if we have to go David by David to those realizations, each requiring a dashcam video before he gets the point, we are doomed to a long and dreary future of Fergusons.

Last year, when the thug George Zimmerman was acquitted in the killing of Trayvon Martin, I wrote that black people need to “wake the h—l up” — organize, boycott, vote, demonstrate, demand.

But black people aren’t the only ones sleeping. Too many — not all, but too many — white people still live in air castles of naivete and denial, still think abiding injustice and ongoing oppression are just some fairy tale, lie, or scheme African Americans concocted to defraud them. Or else that these things are far away and have no impact on their lives. The fires in Ferguson Monday night suggest that they continue that delusion at their own peril.

I still think black folks need to wake the h—l up.

But white ones do, too.

Leonard Pitts Jr., winner of the 2004 Pulitzer Prize for commentary, is a columnist for the Miami Herald. Readers may write to him via email at lpitts@miamiherald.com.

Wow. Just … wow. So what’s next? Will it turn out Mother Teresa was a pornographer? Or Mr. Rogers a... read more