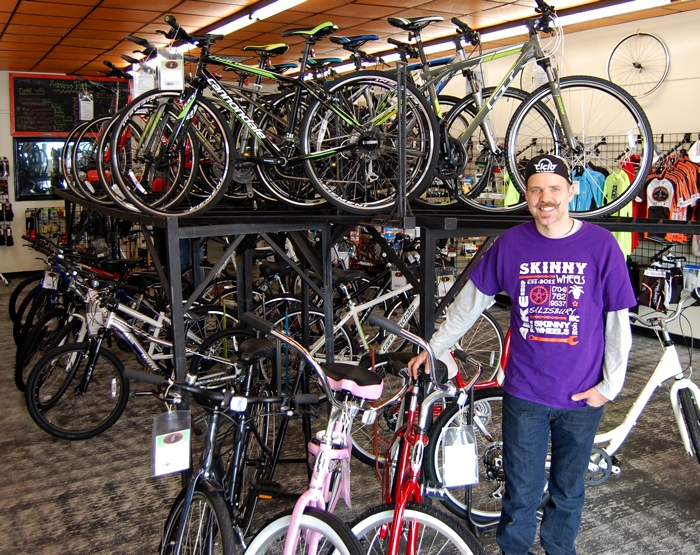 For anyone who enjoys getting around town on two wheels, there’s a new group bringing bicycle riders together.

The Salisbury Bicycle Coalition had its first official meeting last week in the upstairs room above Benchwarmers. Over beer, wine and pizza, bike riders discussed how the coalition will function and what its goals will be.

Basically, the coalition is meant to be a network for people who like to ride bikes, whether it’s for leisure, fitness or any other reason. The coalition also wants to spread the word around the community about the positive aspects of bike riding — giving back to the community will also be a priority.

Jennifer Pfaff owns the Green Goat Gallery in Spencer and said she rides her bike to work. “It forces me to be quiet,” she said, adding that riding a bike is very sensual and a form of meditation.

Other riders agreed, saying riding a bike allows a person to be more aware of their surroundings. People at the meeting said they notice things while riding a bike that they wouldn’t when driving a car. Bike riding gets them more in touch with their community, they said.

As of now, the group plans to meet on the second Wednesday of each month. A website, www.salisburybicyclecoalition.org, offers information about the group, planned events and local businesses that offer specials and discounts to bike riders.

The group also wants to make the community more bike friendly, including working with the new county Board of Commissioners to get approval of the Carolina Thread Trail master plan for Rowan County.

Eric Phillips, who owns Skinny Wheels bike shop on Innes Street in Salisbury, said people tell him all the time, “I would love to ride a bike, but we don’t have any place to ride it.” But there are places to safely ride a bike in the county, he said, and one of the initial reasons for starting the group was to build local advocacy for bike riding.

Phillips rides his bike to work, a 12-mile trip from his home in Davie County.

He said the coalition promotes economic activity by riding to businesses,  like a coffee shop or to do grocery shopping, and spending money. “We’re showing other people that we can use bikes as transportation,” he said.

Having a coalition will show leaders in the county that having a bike-friendly community is something people want, Phillips said.

“If they don’t see the support for it, they won’t act on it,” he said.

The coalition’s next meeting is set for Dec. 10 at 6 p.m. A venue has not been chosen yet.