Child transported to hospital after falling off parade float 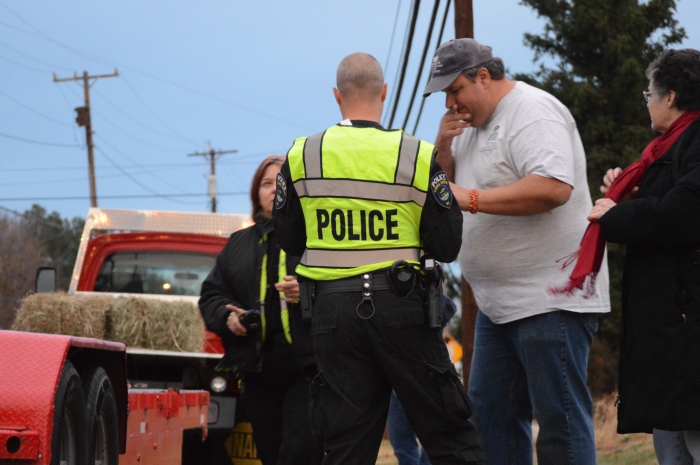 Josh Bergeron / Salisbury Post - Bystanders talk to police shortly after an 8-year-old male child was pulled onto the road during the Southern Rowan Christmas Parade. The float ran over the child's leg and he was transported to CMC Northeast. Police were unable to confirm the extent of the child's injuries.

CHINA GROVE — A child on a youth football team float was transported to the hospital Tuesday evening after his clothing was caught on a float wheel during the Southern Rowan Christmas Parade.

A male 8-year-old child — who family members identified on Facebook as Caden Lewis — was transported to CMC Northeast with an injury to his leg or foot. As Lewis was sitting on the edge of the trailer, his pants became caught on the wheel, which pulled him onto the road near the intersection of Stevens Street and South Main Street, said China Grove Police Officer R.M. Helms.

Helms said the trailer subsequently ran over Lewis’ leg and the driver of the truck pulling the float immediately stopped. The driver told police he felt a bump and looked in the mirror and stopped, according to Helms.

Helms said Lewis was coherent and breathing shortly after the accident, but in a lot of pain. A hospital representative confirmed Tuesday night that Lewis was being treated in the Emergency Room of CMC Northeast.

The driver of the vehicle was John Hatley, of Concord. Hatley was pulling a trailer draped in a sign that read South Carson Colts. The vehicle is owned by Rick’s Big Truck Sales in Kannapolis.

“We’re going to put a case together and give it to the district attorney to decide if it’s criminal negligence or just an accident,” Helms said. “We intend to look into the criminal aspect of the case and see if [Hatley] will be charged. At the end of the day, we are really excited that the child is OK.”