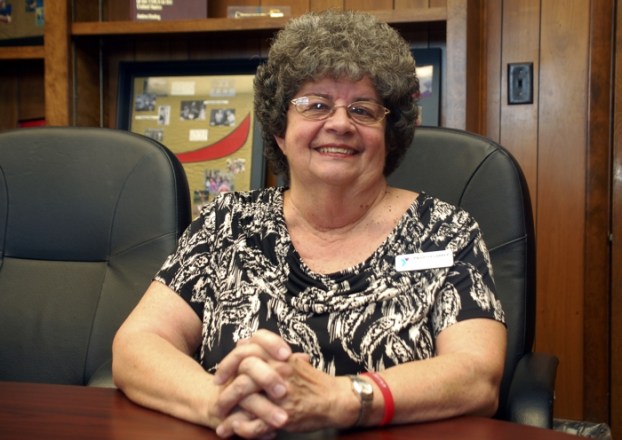 Mark Wineka/Salisbury Post Paulette Lambert has worked in the offices of Cannon Memorial YMCA for 50 years.

KANNAPOLIS — On the morning of Aug. 14, 1964,  18-year-old Paulette Duncan wanted to make a good impression, so she showed up five minutes early for her first day of work at Cannon Memorial YMCA.

Or at least she thought she was early,  Kermit Hinson, then interim general secretary for the Y, was expecting her at 8:30 a.m., not 9 a.m. She was really 25 minutes late.

“He thought it was very funny,” Paulette says of their mixup. “In his defense, I was the first person he had hired, so it was all new to him as well.”

Neither Paulette — now Paulette Lambert —  nor Hinson could have known back then her first day of work was the start of a 50-year career with the Cannon Y. She was fresh out of North State Business School when Hinson approached Estes White, director of the school, and asked if he could recommend anyone for the secretarial spot open in the Y’s administrative office.

White gave him Paulette’s name. Hinson interviewed her for the job and offered her the position after they had talked.  Happy enough to skip, Paulette was heading down the front steps of the old Cannon Memorial YMCA building, when Hinson came running out the front door.

“Miss Duncan, Miss Duncan, would you mind coming back into my office?” Hinson yelled to her.

Paulette thought the worst. Was Hinson having second thoughts about hiring her? It turned out, she still had the job, but Hinson needed her to fill out an application as a formality.

“I think he was probably as nervous as I was,” Lambert says.

One morning this August, after Lambert had attended a Y prayer group and planned on going to lunch, coworkers led her instead into a room at the West C Street location where her family and friends had gathered to celebrate her 50 years with the organization. Lambert was floored by all the attention.

Over 50 years and counting, she has worked behind the scenes through seven different general secretaries, executive directors and now chief executive officers. She started with Hinson, then followed up with Walter Safrit, Jerry Shepherd, Bill Fesperman, Roland Davie, Gray Stallworth and now Ron Davis.

Paulette’s official title today is personnel specialist. She handles a lot of paperwork for Cannon Memorial Y’s three different branches — fun stuff such as insurance and workers’ compensation for the organization’s 350 employees. Two days a week, new hires come to the office on McLain Road, where she helps them complete all the necessary paperwork — much like Hinson had her do for him 50 years earlier.

Paulette, 69, says she has been blessed with good health all of these years. She missed six weeks once because of reconstructive foot surgery, and she had some maternity leave associated with two of her children. Otherwise, she has been a rock for a YMCA that has seen other examples of this kind of loyalty.

Ray Waller, who still gives massages at the Y, has been working for 60-plus years. Before she retired, assistant bookkeeper Janie Goodnight logged 58 years with the Y. Lambert says she still looks forward to going to work each day, always appreciating the Y’s mission.

“I work with a great bunch of people,” she adds. “I was raised in the Y, and I know what this Y is all about.”

Lambert has lived in Kannapolis all of her life. Her parents,  the late Paul and Louise Duncan, both worked for decades at Cannon Mills Plant No. 1. Her dad was in the boiler room; her mom, the weave room. Lambert feels as though she grew up at the Cannon Y. She was part of its summer programs, learned how to swim at the Y and was a member of the Hi-Y Club.

Paulette graduated from A.L. Brown High in 1963. By taking all the clerical courses in high school and attending the business school after that, Lambert was well-trained.

She could type 120 words a minute on a manual typewriter and was adept at shorthand, which she needed for all the letters Hinson would dictate to her. She also kept up and typed schedules for the various departments and Y sports leagues.

“I thought I would work maybe five years and move on to something else,” Lambert says, looking back. “(But) I enjoyed the job, and I enjoyed the people. Hinson was a sweetheart of a boss, and I liked what the Y stood for.”

So she kept working. Along the way, she married twice and today has three children and seven grandchildren. She didn’t give up her Royal manual typewriter for an electric model until 1987, when the old Cannon Memorial Y closed and moved to its new location on West C Street. The computer age wasn’t far behind, and though a bit intimidated at first, Lambert adapted quickly.

Davis, her current boss, has told her she cannot retire until her new computer wears out.

There have been several times, Lambert says, when she has been particularly proud of the Cannon Y, which also has branches in Concord and Harrisburg. She liked when the Y welcomed its first black member and says it’s hard to believe now that segregated facilities ever existed.

She also appreciated the Cannon Y’s response after the Pillowtex plants shut down in 2003, leaving some 4,000 local people out of jobs. Her sister Gloria was one of those workers.

“It was heartbreaking, especially for the older people who had worked there all their lives and that’s all they knew,” Lambert says.

The Cannon Y stepped up for former Pillowtex employees who were members by extending their Y memberships without charge, “so they would have a place to come and deal with some of their stress,” Lambert says.

When she’s not working, Lambert is the official scorekeeper for the city of Kannapolis’ church softball league. She and her husband of almost 35 years, Jimmy Lambert, also are diehard A.L. Brown High football fans. They attend every game — home and away.

“I go to talk,” Paulette says. “My husband goes to watch the game.”

When the Cannon Y had its gathering for her in August, the staff probably thought 50 years deserved more than, say, a wristwatch, so they presented her with a clock instead.

It should finally help her to get to work on time.

1. Since the end of August, AMVETS Post 460 has been holding what event every Saturday at its location on Lakeside... read more