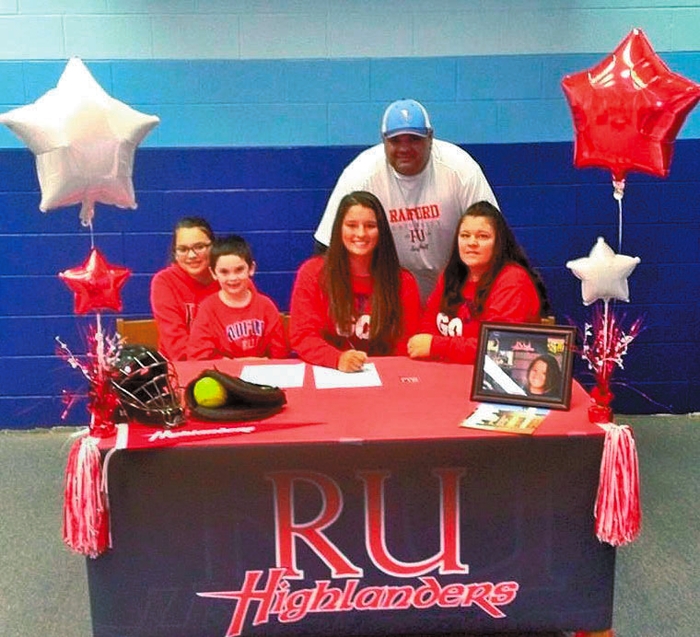 MOUNT ULLA — Catchers accept more than their share of scrapes and bruises.

Behind the plate for softball teams since she was 9 years old, West Rowan’s Marissa Yow has absorbed so many bumps along the way that she feels well-prepared for a career in sports medicine.

“A broken toe, a shoulder injury, a bunch of turned ankles and some tendonitis,” Yow said with a laugh. “Definitely, I want to go into sports medicine or physical therapy.”

Yow’s softball ability has given her an opportunity to get a college education. She recently signed with Radford’s softball program. That’s the Division I school in western Virginia where former West Rowan basketball player Ayana Avery has excelled. Radford is about 15 miles from Virginia Tech.

“I went to a camp in Virginia and met the Radford coaches there,” Yow said. “I went for a tour of the campus last winter and met the team. The girls treated me like I was already part of the team and that was cool. I  knew that’s where I wanted to go, and I was excited when Radford offered.  Softball is important to me — it’s made me who I am.”

Yow gave the Highlanders a verbal commitment as a junior and signed a National Letter of Intent during the early signing period.

“We couldn’t be more pleased for her,” West Rowan coach Jimmy Greene said. “She’s put in a lot of work. She’s a good player, she’s been a good teammate and she makes good grades. She’s a leader, and that’s ideal  for a catcher. Teams look to the catcher like they do the point guard in basketball or the quarterback in football.”

“Marissa is a go-getter,” Cole said. “She’s got a ton of power and I remember she blistered a home run in the first game she played for us. She’s primarily a catcher,  she’s very good at blocking balls and she has a good arm. We play several games a day. She gets a break from catching by playing third base.”

Yow had a stellar season as a junior for the Falcons, belting five home runs and 10 doubles, batting .328, driving in 28 runs and making only two errors. She was instrumental in West Rowan winning its first championships since 2007. The Falcons went 18-6 overall and 13-3 in the league to sweep the SPC titles last spring. West lost, 2-1, in the second round of the 3A playoffs.

“The key for me having a good season was just learning patience,” Yow said. “We had other players that got the team fired up, but I tried to stay in control and show confidence.”

The shining moment for Yow came last April 11, when her walkoff homer beat Central Cabarrus. It was a homer off a quality pitcher and beat a quality team. That was the victory that propelled the Falcons to the championship.

“They’d beaten us on a walkoff at Central,” Yow said. “So that was a big one for us.”

Yow was All-South Piedmont Conference as well as All-Rowan County. The Falcons return four standouts in Yow,  second baseman Taylor Martin, pitcher/slugger Peyton Greene and shortstop Hunter Gibbons, who has signed with Western Carolina. The top of their lineup will be as good as anyone’s, and they could make another run.

“We’ll have another good team,” Yow said. “Now that I’ve signed, I want have anything to worry about — except my senior project.”